On Sunday I was standing at the top of hill inside a modern spiral-shaped sculpture made of huge rocks called The Coldstone Cut in the heart of the Yorkshire dales. Buffeted about by the wind, we looked out from the viewing platform over the only remaining working aggregate quarry in Nidderdale. The information boards cited distances to various locations in the UK and around the world. When I read we were 17890 kmss from Sydney, that well-known song I’m Gonna Be (500 Miles) by the Proclaimers came to mind! And then it stuck in my head for the rest of the day. .. 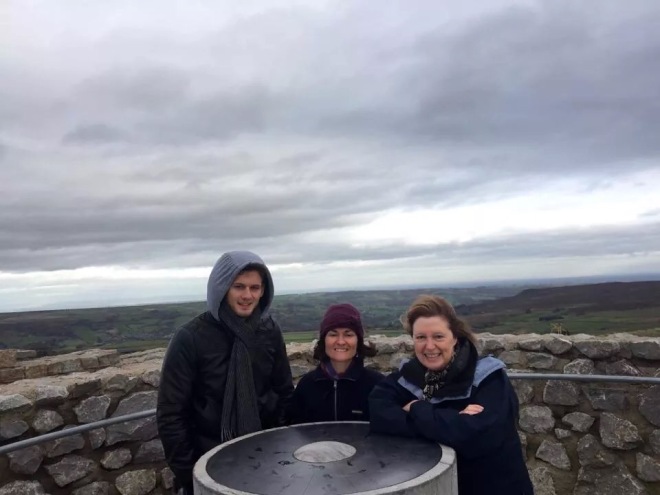 At the top of the Coldstone Cut

I was with my elder brother Charlie, his wife Pam, my niece Anna and her boyfriend Joe plus the two dogs Poppy and Rio on a day out in North Yorkshire. We drove from Knaresborough through Nidderdale and Pateley Bridge to the Moors. On the way we passed through Scotton where Guy Fawkes was born (I’m hoping to see some bonfire and firework action – if only through the window at Mum’s on 5th November) and followed the Tour de France route with painted bikes and bunting still adorning many a facade, garage forecourt and shop window. 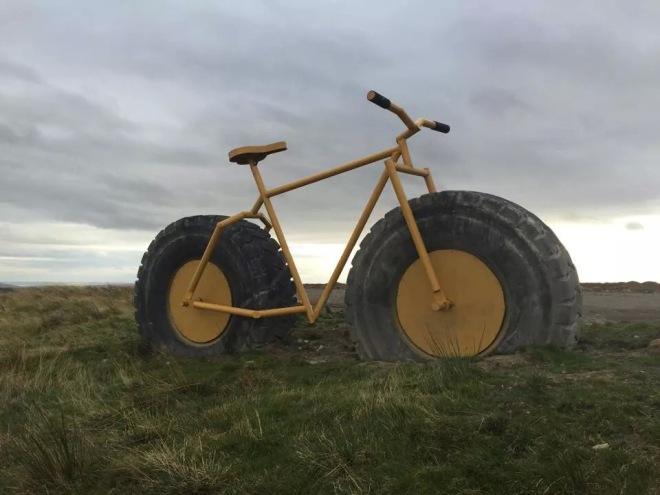 We parked at Hebdon and walked past ancient stone walls clad in thick layers of lush green moss and then followed the ghyll ( or beck) as it carved its way through the valley. It’s an ancient landscape that feels untouched by time, the water in the beck/stream peaty brown, the grass soft and spongy and carpeted in autumnal rust-coloured bracken. While much of the UK is dense and over-crowded, here there’s space, wilderness, birds and plenty of pure air. But this area wasn’t always a walk in the park – derelict buildings and workings date back to the mid 1800s when lead was mined here. Further along there’s a lime kiln that used to produce mortar and fertiliser. In those days conditions were harsh, health and safety minimal and child labour common. 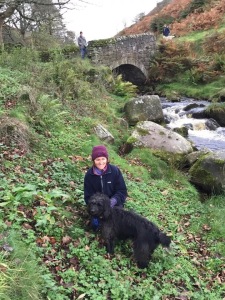 Walking up the ghyll with Poppy

Charlie, Pam, Me and Anna – Joe took the piture

We were too pumped up on fresh air to dwell too much on the past and, tapping into our inner child, Joe, Anna and I ran, slid and slipped our way to the top of a hill from where we got magnificent views.

Anna and I at the top of the hail

All that exercise gave us good appetites and we went to the Red Lion at nearby Burnsall for lunch. Coincidentally, I had a mini break with Mum at the Red Lion in summer 2011. It’s an old building with lead-mullioned windows and well-worn, narrow, creaking steps up to the bedrooms. I recall being rather spooked by the information folder in the bedroom which advised that the pub had a resident ghost. Obligingly they supply guests with a sign to hang on the door saying – ‘ghost don’t stop here’. Whether this was a leg pull or not I will never know, but I hung up the sign and left the light on all night almost daring the spectre to appear. This time, I am happy to report, we had a spirit-free lunch apart from my vodka and tonic. What’s more I went the whole hog and had haggis served with pureed parsnip and carrot. Rather delicious and definitely not something I would get at my local cafe in Melbourne.