Further to my last blog about bees, I’m staying with the theme of the natural world. Incidentally, Felicity and Marc, my Surf Coast bee-keeping friends, returned home from holiday at the weekend to find their bees had swarmed. Although they only got in at two in the morning due to a delayed flight, they were up at five thirty to catch the bees and get them safely into a new hive. Interestingly, bees are at their most tame when they swarm. Basically, they are too drunk on honey to bother with us homo sapiens; they swarm either because all is well, the hive is overflowing and they need more room, or the queen is old or in poor health and needs replacing. In this case it was the former reason and a normal spring occurrence.

I find the interaction between humans and the natural world endlessly fascinating. How can we understand animals better and avoid the ‘them’ and ‘us’ dynamic where we impose our will on them and deny them their wisdom and role in maintaining a healthy planet? I sometimes get emails advertising animal communication courses and have been tempted to sign up and find out how to talk to the animals. Imagine how much it would help when training Bertie if I could reason with him without resorting to liver treats, a training leash, the occasional spray of a water pistol, hand signals and verbal commands. Wouldn’t it be wonderful if I could get into a still and meditative space and communicate energetically? 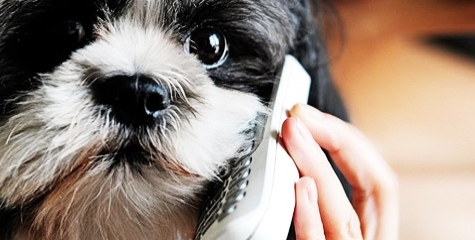 If you think that sounds a bit airy fairy, then take a look at this wonderful documentary featuring the work of South African animal communicator Anna Breytenbach.

Here is a synopsis of what it’s all about:

“Anna Breytenbach has dedicated her life to what she calls interspecies communication. She sends detailed messages to animals through pictures and thoughts. She then receives messages of remarkable clarity back from the animals.Anna can feel the scars hidden under a monkeys fur, she can understand the detailed story that is causing a bird’s trauma, she transforms a deadly snarling leopard into a relaxed content cat – the whole animal kingdom comes alive in a way never seen before – wild birds land on her shoulders, fish gather around her when she swims, and wild unfamiliar baboons lie on her body as if she is one of their own.
This is the first full length documentary film on the art of animal communication.”

At just under an hour long, this is not something to watch at your desk. But I urge you to grab your tablet or laptop and watch it at home one evening. It’s not only incredibly moving – I was in tears (of wonder) by the end but also really interesting. It looks at the origins of animal communication in animal tracking and how indigenous communities still retain a special connection to, and respect for, the animal kingdom. Anna’s work is grounded in truth and integrity. There’s no hocus pocus, hyperbole, mystique or magic. She simply puts herself into a calm and grounded space, edits out the white noise and connects with nature.

It’s inspired me to interact with Bertie in a different way. If I still my mind and body and tune in, perhaps I’ll learn to talk canine with him. Then I can explain that he doesn’t have to copy the neighbours’ dog and bark at the fence or get all feisty when people come to the door… But, even if I could chat to him about the possum problem (he likes to bark at them every night or go looking for them), I think he would say: “Mum, get over it. It’s in my nature. I’m a hunter. That’s the way I am.” And he’d be right. However much we anthropomorphize our pets (think doggie yoga, puppy chinos, clothing, birthday parties and worse), they are animals and we need to remember that. Time for us to woof off for a walk…

You could argue that I need to get out more but I’m really going to miss puppy pre-school at my local vet’s. As good as therapy, it’s hugely reassuring being able to share the highs and lows of puppy pranks, playtime and puddle-making with other parents and to seek tips from veterinary specialists. But more than that, it’s been highly amusing observing how the pups interact socially. In an upstairs room at the practice, the pre-school sessions resemble a canine cocktail party complete with canapés – no spring rolls, salmon blinis or arancini balls here, just plenty of chicken, tasty biscuits and dried kangaroo strips. OK, so the dogs sniff each other out rather than talk about what they do for a living but they do have characteristics in common with us humans.

There’s Goodie-Two Shoes Toffee,for example, a petite, caramel-coloured Cavoodle who, at just ten weeks, had mastered an impressive number of commands – sit, stay, drop etc – and was flirting with the boys. In the human world, I reckon she would be a ladder-climbing PR strategist, work out a lot, wear expensive fashion labels and have her teeth whitened. Feisty, determined and able to ‘work the room,’ she might turn out to be a Devil wears Prada Primadonna. Then there’s Bella, a bouncy, full-of-beans Groodle. Blessed with curly black hair and a big heart, she’d be a fabulous hostess; plump, big-boobed, a bon viveur, great cook and the life and soul of any party. She’d probably ‘over-egg’ the pudding and drink one too many glasses of red wine here and there, but everyone would love her.

Rambo (to my English ear, I first thought his name was Rainbow), is a cute black-coated miniature schnauzer and a bit wary of other dogs. He protects himself by barking to keep them away. In real life he might be an IT type dressed in black jeans and a black polo top with a computer bag slung across his body. A bit afraid of intimacy he hides behind his beard and keeps himself to himself. Actually, it’s his beard that’s the problem and is keeping the opposite sex at bay. It’s unkempt and straggly and he gets food and drink caught in it, making it a total passion-killer. A lovable loner, you have to persevere if you want to get to know him.

Like any working dog worth his salt, Bertie, my spaniel, has a highly developed sense of smell and cases the joint for every scrap. He’s a born hunter and opportunist and his human equivalent would always be on the lookout for new opportunities and markets. A charming entrepreneur with a twinkle in his eye, Bertie is the sort that can get away with anything. But, whoops, perhaps not! What’s that on the floor? Amid all my anthropomorphising, Bertie’s canine alter ego drops a brown deposit on the floor. As if to remind me that he’s a dog, fair and square. All right, Bertie. Point taken. But the question still remains. What WILL I do on a Tuesday night now you’ve graduated from puppy pre-school? 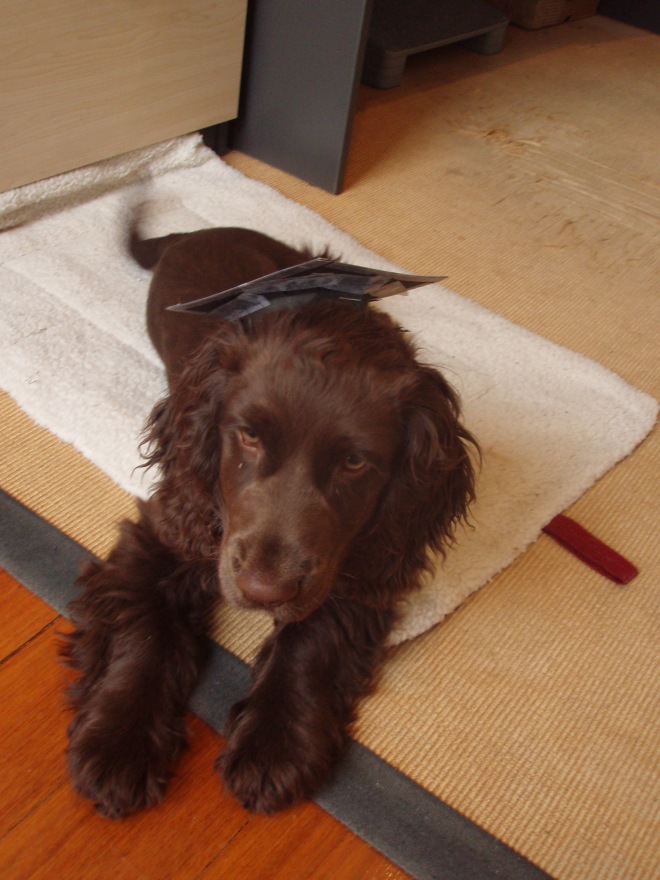 This mortar board is all very well but where’s my next treat?