You get what you pay for I thought as I walked into the Airbnb place I had booked in Torquay (my sister always thinks of Fawlty Towers when I mention Torquay but I am of course referring to the township at the start of the Great Ocean Road in Victoria, Australia).

After an almost constant stream of Airbnb guests since the first week of December and having started a new job the week before last, I was ready for a break, one where I was the guest. For $65 a night and dogs (Bertie) allowed, I guess I shouldn’t complain but it did look and sound nicer in the description and pictures. In fact, it was definitely more Fawlty than Five Star: the kitchenette and bathroom were more or less one and the same with the sliding door to the toilet and shower jammed at three quarters shut (I’m glad I was alone; I’m bladder shy at the best of times); the mini bar fridge froze my salad; and a laundry trough sink doubled up as the place to wash teeth, hands and dishes. It reminded me of a unit I rented in 1770 (the place not the year!) in Queensland where it was the same situation in reverse. I had to do the dishes in the hand basin. And in both places I had to unplug the kettle before I switched on the toaster. See what I mean about the Fawlty-ness?

The bedroom was OK in a very no-frills way with views over the nondescript garden of scrubby grass and a Hills Hoist washing line. It was all rather cobwebby behind the bed, the cupboards in the same brown wood as the toilet door were also jammed, and a sad sedum with leggy roots sat in a glass bottle on the window sill. Never mind, I got to work and doctored the bed as I have a Princess and the Pea sensibility when it comes to mattresses. So I padded out the firm mattress with a spare duvet and the egg box foam topper I had brought from home.

You may laugh but there are legions of people out there who struggle with mattresses when travelling from home. I did a Google search on it and found my way to Tempur Pedic travel toppers that roll up into a handy bag. For a mere $599 plus shipping I could have one delivered to my door. That’s not financially feasible right now so the $15 egg box topper from Kmart was rather a steal.

Thanks to therapy in the form of the first episode of Series Five of Downton Abbey and a lighting a nice candle to brighten the place up – not to mention my homemade salad (before the minibar got to it) – I nevertheless felt like I was on holiday, albeit one more akin to camping.

Although the place lacked frills and finesse and had no views, it was a case of Location, Location, Location! It was situated right across the road from the beach. So the minute we arrived Bertie and I dashed down to the dog beach and both swam and lay in the sun. The next day the temperature dropped from the mid thirties to about sixteen degrees and we had thunder and lightning. Not to be defeated I headed to the op shop to hunt for an outfit to wear to a Studio 54 themed party. After a bit of rummaging I found a silk and satin LBD and a pair of fringed cowboy-type boots. I reckoned the boots in particular looked more 70s than noughties. Amazingly, they were in my size, brand new (with the original price tag still attached) and really comfortable.

The next morning – still cold, breezy and wet – I was walking Bertie on the beach and realised ‘we’ must have lost his ball the previous day. Not to worry Bertie, I said. We might well find an old ball somewhere. Minutes later we found an orange and blue ‘chuckit’ dog ball and thrower lying in the sand. I looked around but there was nobody to claim it so I picked it up, much to Bertie’s delight.

It felt like I was having mini lottery wins, and to celebrate I went for breakfast at Mobys, a most delightful cafe on the esplanade. Earthy, friendly and quirky with lots of different nooks and crannies, I sat on a sofa on the deck with Bertie by my feet, ordered a delicious egg and bacon sandwich and pot of English breakfast, and read my book. Bliss! 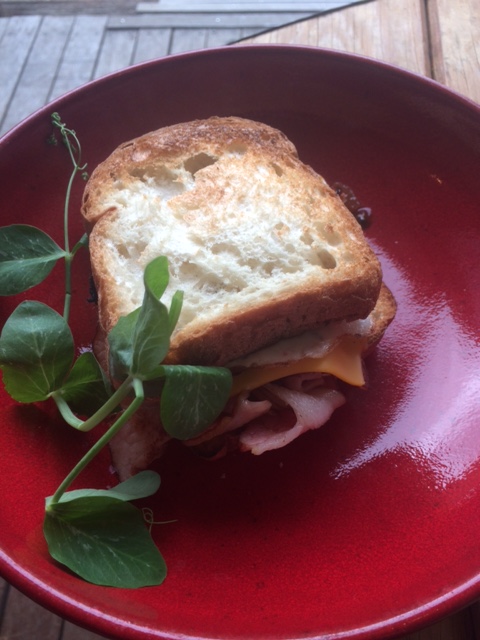 By lunchtime that day I was visiting a friend in the next door township of Anglesea. After lunch at the General Store, we called in at the Baptist’s Second Store where I found a lamp for my guest room, a table runner and a coffee table all for $30. The coffee table is one of those varnished brown jobs. With a light sand and a few coats of chalk paint I plan to transform the LBJ just as I did the drop-leaf table that my neighbours passed on to me a few months ago. Then – yes there’s more – when I got back to Melbourne a friend told me that his daughter was having a garage sale on Saturday morning. He mentioned that there were bar stools for sale amongst other things so I was there by 8am. The bar stools look great in my kitchen. Possibly a wee bit high but I’m not tall so that suits me. Taller and broader guests will simply have to sit side saddle! Convinced I was on a winning streak I bought a lottery ticket on Saturday. Needless to say that didn’t come off – not yet! Better stick to the day job.

Now that my return to the Big Smoke is imminent – in between writing this I’m packing boxes, cleaning out cupboards and trying, and failing miserably, to clean the front windows (WHAT is the secret?) – I thought I would share some photos of a few of my favourite coastal views, things and places. So sit back and take a little tour with me: 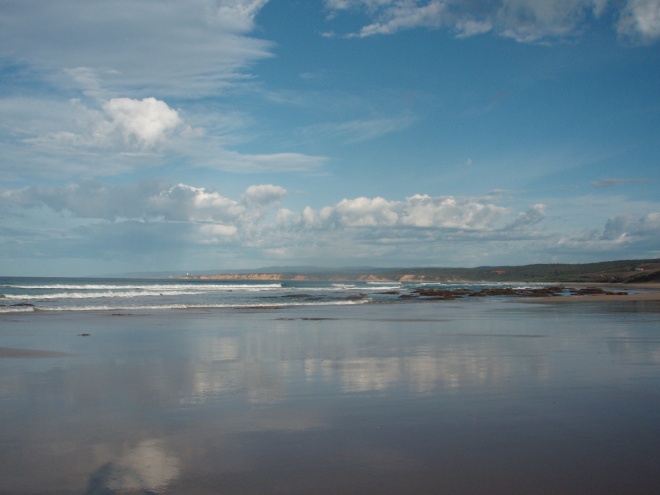 Morning view of the ‘Back’ Beach – popular with surfers, walkers and dog walkers

Bertie on his morning walk 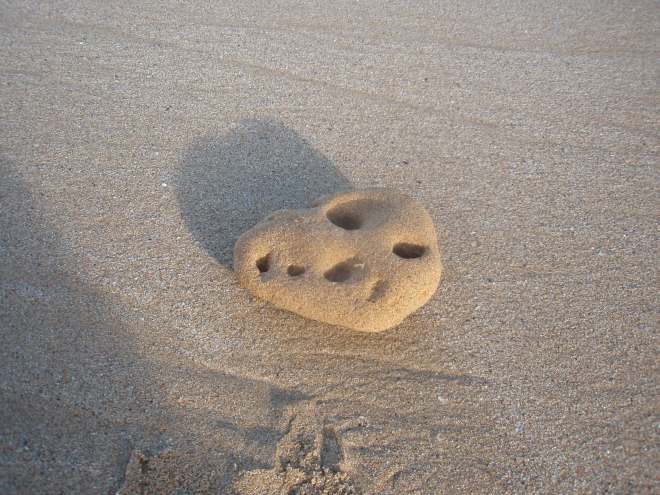 I have a collection of stones at home, but in the interests of de-cluttering, left this one on the beach. 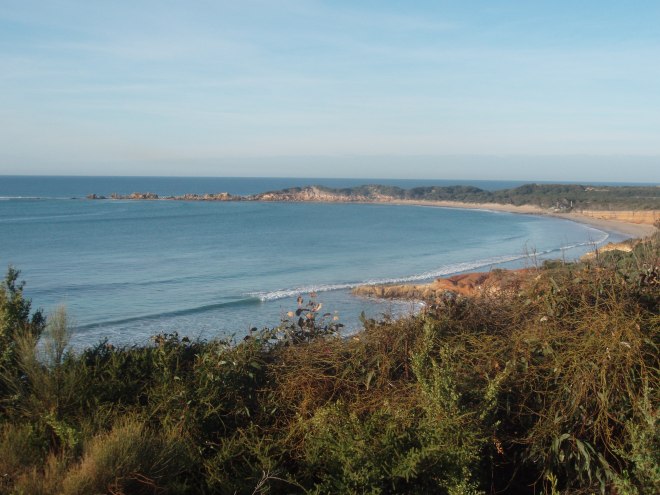 Can’t see the wood for the trees? Moonah Woodland along the coastal path.

Anglesea River – a very different vibe from the beach

Not quite Vidal Sassoon but they rescued my hair from a previous hatchet job! 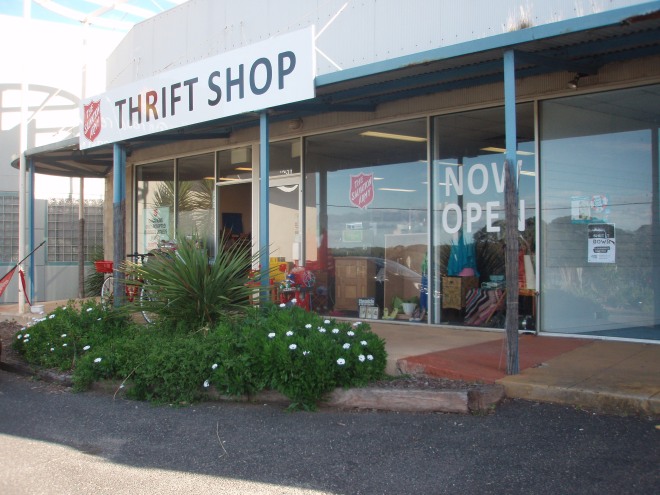 My love affair with op shops continues. Here I found books, an Arzberg bon-bon dish, a drape for my sofa and an ovenware dish for Shepherd’s pie, my menu du jour when I had visitors. 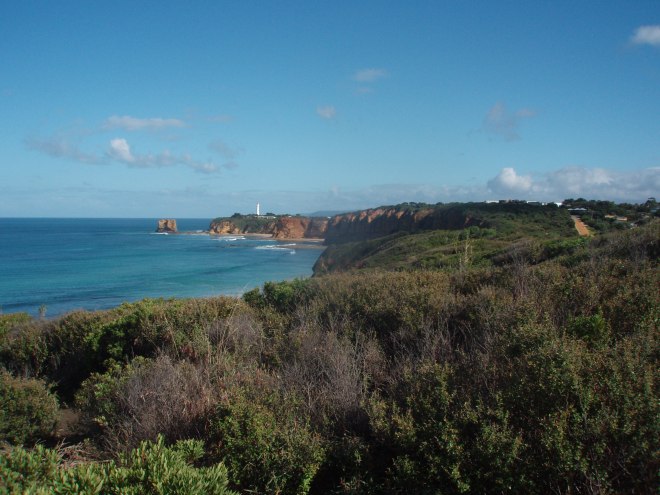 Looking towards Aireys Inlet and the Lighthouse

And the last word goes to Bertie – Do we have to leave tomorrow, Mum?

I had a wonderful moment the other day in Chadstone Shopping Centre of all places. Much to my brother’s incredulity, this was my first visit to the so-called ‘Fashion Capital’ after nearly ten years in Melbourne. And I was there more by default than by design; I had gone to check out lights and lamp shades in Freedom, only to discover – after peering at the alphabetical list of stores – that the furniture and homewares store was in the suburb of Chadstone, not in the actual mall.

As I walk briskly towards the exit passing several designer stores on the way, a fellow shopper stopped and asked me where I had bought my pants. “Hmm, that’s tricky,” I said, all non-committal. “Oh,” she replied. “You made them?” “No worse,’ I replied. “Ahh, I get it, you got them overseas,” she said, perhaps picking up on my English accent. “No, even trickier,” I said confessing that I had bought them for four dollars at St. Vincent’s Op Shop.

How satisfying it was to be wearing cute little fisherman’s pants, my Marks and Spencer blue and white striped T-shirt (a gift from my mother) teamed with a five dollar garage sale bag. Not just to be wearing them but to have them admired in a retail Mecca where thousands of dollars change hands daily if not hourly.

It’s the thrill of the chase I love. Chances are that you’ll find that certain je ne sais quoi that no one else has. And sometimes you find just what you need when you need it.

In fact, the same week I went to Chadstone, lucky finds did seem to grow on trees. It started when I popped my head over the fence to tell my neighbour about my impending renovations. Far from pulling a face about the likely increase in decibel levels, she told me she’d been meaning to pass on some clothes that didn’t fit her daughter, and would I like to sort through them? Well, never one to look a gift horse in the mouth, I said yes and, about five minutes later, I saw a bag dangling from a branch by the fence. The black pants from Kookai fit like a glove and the merino wool cardigan from Witchery looked pretty good too.

A few days later I took yet another bag of ‘stuff’ to my local Op shop, which amusingly calls itself Biccie’s Boutique in a Chadstone-eat-your-heart-out kind of way. As I was lugging my bag of clothes, shoes, CDs, books and bric-a-brac to the back of store, I spotted a black and white checked coat, a Précis size eight in perfect condition. As it happens, I’d been meaning to buy a new winter coat for about three years but for one reason and another hadn’t. And that’s probably because this one had had my name on it all along.

Then – yes there’s more – I spotted a bathroom vanity cabinet, a dead ringer for the one I was going to buy for 85 dollars in Bunnings to put in my new cupboard-sized guest bathroom. OK, so it needed new handles and a touch of paint but was otherwise just the thing. I took it to the counter with the coat and paid ten dollars for both. It turned out that Biccie’s was having a one-day 50 per cent off sale.

Abundance comes in many forms and often has nothing to do with how much money you have in the bank. I don’t always shop in charity shops but this year I’ve been focusing my energy and resources on giving my house a makeover. And I’m doing so as a freelance writer with fluctuating income levels. So, instead of a new winter coat and other wardrobe wants, I bought a claw foot bath – as you do. Needless to say I found a gorgeous chariot-like number, black with a white roll top and white feet. What’s more, it was reduced by a massive forty per cent. But as it turns out, I got a new coat too. A win, win.