It’s been a while since I shared a bed but here we were… If only he would stop tossing and turning and go to sleep. I kept ending up with my left side exposed as he (unintentionally I’m sure) hogged the bed covers, which, incidentally, are white and so were covered with his chest hairs by the morning. I think I got about four hours’ sleep. I guess it would’ve been easier if he hadn’t been wearing a lampshade on his head.

You see, I was sharing a bed with Bertie, my dog, a novelty for us both. His normal bedroom is in the laundry, and he is quite happy there. But on this occasion he was agitated, restless and a bit out of sorts. You can hardly blame him; he’d had the snip that morning and was clearly feeling the after-effects of the anaesthetic and the drugs, not to mention losing part of his anatomy. 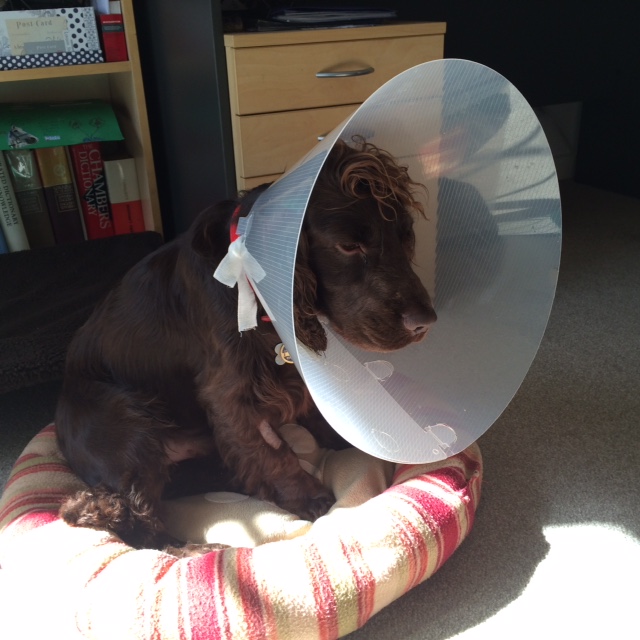 How long do I have to wear this ridiculous Jane Austen bonnet on my head, Mum?

I’d had him scheduled for castration last Christmas when he was nine months old. But, on doing my research, I learnt that testosterone is very beneficial for the bones, joints and muscles when a dog is developing and growing. So I cancelled at the last minute. The big drive to de-sex a male dog at six months is all about population control. But that’s not such an issue where I live: my courtyard is escape-proof but he’s anyway unlikely to pick up the scent of a female on heat as 99.9% of them have been spayed.

This Christmas – he’s now 20-months-old – I decided it was time to make my mind up for once and for all. And I decided to take the plunge. However small the risk, there’s now definitely no chance of Bertie hooking up with a girl and making babies, no chance of him getting testicular cancer later in life, less likelihood of him developing prostrate problems and some chance of him calming down a bit. Plus – and this was a bonus, not the deciding factor – the annual council registration fee reduces dramatically. A win-win, you could say.

So I was all ready to do the deed and to take this manhood-stripping decision on behalf of my beloved boy when I bumped into three dog owners sitting firmly in the non-castration camp the day before. Did I really need to get Bertie done, they asked? He didn’t seem to be displaying any of the troublesome testosterone-driven behaviours. They’d all been so glad they had left their dogs intact…. Just what I didn’t need! I wavered right up until the moment we walked into the vet’s at 8am the next morning.

Wavered and wept in fact! It’s scary handing your dog over to the surgeon’s knife. What if he didn’t pull through? What if he changed character and lost his mojo? What if? What if?! As it was he nearly pulled me over when I went to collect him that afternoon and walked him to the car. Even though he was agitated that first night, he was still up for chasing possums and rushing around whacking the walls (and my legs) with his Elizabethan collar. I’m still sporting some impressive bruises!

He was possibly a bit quieter those first few post-surgery days and we had to content ourselves with geriatric on-leash walks around the block, but I knew he was his old self when, even when encumbered by the plastic lampshade, he managed to pick up and steal my socks and run around the house until I chased him. Eight days later we had our first off-leash walk and Bertie ran around like a mad thing. Then at the weekend we went for a celebratory romp and swim on the beach.

But yesterday was our biggest adventure of all. I had arranged to have coffee with a lovely Italian friend (we met just recently when she stayed at my house with her sister as Airbnb guests) at one of the cafes in Fed Square. Now Cinzia knows I am devoted to my dog; she gave me a delightful blue mug “My Dog is my Best Friend” with pictures of paw prints and bones. So she thought it was a great idea to take Bertie for his first trip into the city and include him in on our catch-up.
He did bark at a wheelie suitcase on the train (perhaps it seemed like some kind of UFO to him) and then at the sparrows in Fed Square, but otherwise he behaved impeccably. Long may you live Bertie, my Bestie. 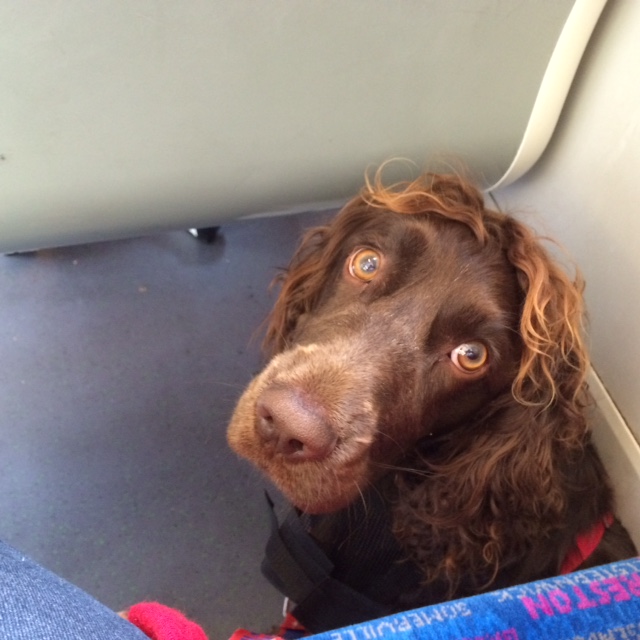 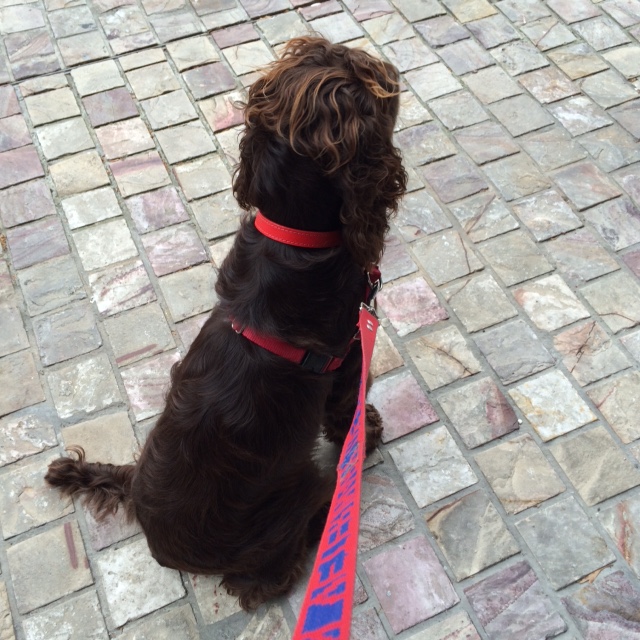 Watching for sparrows in Fed Square

HAPPY CHRISTMAS ONE AND ALL! 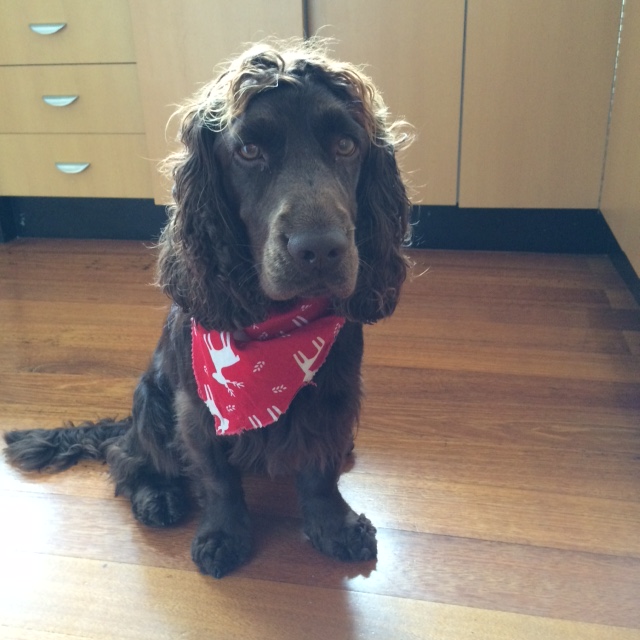 Further to my last post, I’ve had more encounters of the insect variety. In fact, the more I tried to insect-proof the house, the more the various beasts and bugs seemed to pop out of every nook and cranny. I found a spider in my washing – did it go through the machine or just drop off the line and into my wet washing in the basket? Either way it was dead or, as that Monty Python sketch about the dead parrot goes, just resting. I prefer dead to just resting. Then the other morning I woke up to ants crawling over the kitchen sink and in the bin even though I’ve distributed discs of ‘Ant Rid’ about the place. And just to add variety, it being the spice of life, a large earwig had draped itself across my sofa.

However I’ve made progress on the spaniel scratch front. I visited a groomer to sort out the dreadlocks behind Bertie’s ears as he wouldn’t stay still enough for me to cut them out myself. If you’re familiar with spaniels – cockers in particular – you’ll know that they have very long, thick and curly ears which can become repositories for food, water, sand, fluff, grass seeds and more. I’ve done my best to keep on top of the combing but he doesn’t make it easy for me.

Anyway, it was day four of Melbourne’s recent heatwave when we visited the canine crimper. The melting asphalt stuck to my shoe as I got Bertie out of the car and so it was a relief to enter the air-conditioned haven of the pooch parlour and to be greeted by the upturned faces of lots of small, smiley-faced fluffy dogs, looking positively Disney-like in their cuteness. So far so good.

The groomer lifted Bertie onto the table and said, more like, barked: “Why haven’t you taken him to a groomer before?” Take aback by her abruptness, I stuttered something about not realising I should have done so. “The breeder should have told you to do it in the first six months. A dog needs to get used to a groomer otherwise they end up having to have an anaesthetic at the vet’s before you can cut their nails and hair,” she continued, accusingly. “And why haven’t you had him de-sexed?” Determined to stick up for myself, I replied: “Because I haven’t chosen to do so yet.” In fact, and I didn’t share this with her – the animal rescue stickers were enough to explain her strict stance on de-sexing, some of the research says that (population control aside) leaving a male intact until he is up to two years old is beneficial for joint and bone growth. 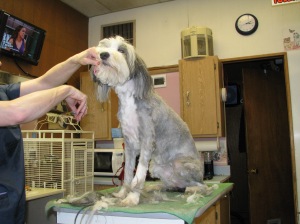 “See these grass seeds?” she said, grabbing a clump of matted fur by his ear and snipping and then shaving the area down to the skin, “they not only cause infections, they can get into his blood stream and affect his heart.” “Well,” I protested, “I have tried to groom him but he bites me and wriggles about.” “That’s because you’re doing it like this,” she retorted, miming yanking the comb through his ears. “With all due respect, I haven’t been doing it like that,” I said getting hot under the collar. How dare this woman imply I am a bad mother!

Little does she know I am the one who has read all the books (well some…), who put a ticking clock and hot water bottle in his bed in the early days to ease his separation from the litter, who made him a special digging pit, showered him with toys, who takes him for two walks a day, puts filtered water in his bowl, experimented with special diets for his sensitive tummy and tried acupuncture to make him a bit less hyper-vigilant!

On the positive side, she did do a good job and she also clipped Bertie’s nails. But that’s not the point. Did she really need to be so blunt, bossy and critical? Imagine if I were like that with my clients. Why have you not over-hauled your website before now? Had it de-jargoned? And what about the fluffy grammar? Had you left it any longer, I would have refused to help and sent you to the web doctor.

How we communicate says a lot about who we are. A generous interpretation of this woman would be that she has a closer affinity with animals than with humans. I found it amusing that she was modelling typical alpha female leader-of-the-pack–I’m-in-charge behaviour. For a short while I had a boss like that. She had a mane of curly hair and arms adorned with bangles. She’d sit down at a meeting, spout jargon and hammer out a point by clopping her bangles on the table and sweeping her leonine hair off her face.

On this occasion, however, I learnt a valuable lesson about grooming (I now comb Bertie’s ears daily) and Mum will be thrilled his nails have been cut. Just in time! She landed this morning and is now unpacking. What’s more my neighbour built the self-assembly fan for me so we’re all sorted.