And now for the final instalment in my retrospective trip to Japan through the pages of my photo album:

I was disappointed by the shinkansen (bullet train)! I had imagined the landscape would rush by in an unrecognisable blur. Of course it is fast – trains travel at speeds of up to 320km/h, it’s just that I had imagined it would feel faster. Maybe it’s because I rush around so much anyway that I failed to notice the sensation of velocity. I certainly kept up a fairly hectic pace once in Tokyo. In fact, I did so much walking and sightseeing that my legs ached like mad and the balls of my feet felt bruised. I was battling an acute case of guidebookitis, a healthy dose of FOMO (fear of missing out; what if this was my one and only trip to Japan?) all topped off with a bout of homesickness having left friends and family back in England. In short, I didn’t stop from breakfast till dinner time.

It took me a few days to get used to the Tokyo Subway System; it’s a maze of different lines, seemingly endless underground shopping malls, confusing signage and ticket machines (well to a non-Japanese speaker) and a constant throng of passengers. According to one travel site, it’s the world’s busiest metro system handling approximately 8.7 million passengers daily.

On arrival in the up-market suburb of Ginza, I set off to find the Sony Store, famed for its Games and Interactive section, only to find it had moved to a different suburb. Later that day I walked for block upon block to find a restaurant in the Roppongi Hills area only to find it had never been in that suburb and probably never would be (I had misread the Guidebook). Another day I walked miles to find Hambachi-Dori, listed as a must-see in the Lonely Planet. It’s simply a street where they sell plates of wax look-alike food, the kind you find displayed outside restaurants. Frankly, once you’ve seen one waxen plate of noodles, you’ve seen the lot. See what I mean about Guidebookitis?

A few days later I covered at least five sides of a triangle (while my map reading is not the best, it didn’t help that many of the side streets were not marked) trying to locate an organic cafe in the heart of the old fabric district, Harajuku. It was 5pm when I finally arrived for a very late lunch.

I also ended up carrying Coals to Newcastle on a few occasions. For example, when I finally reach the 53rd floor of the Mori Arts Centre in Roppongi Hills, the exhibition, Kaleidoscope Eye, was full of Western modern art – including the likes of ‘Britartist’ Tracy Emin. 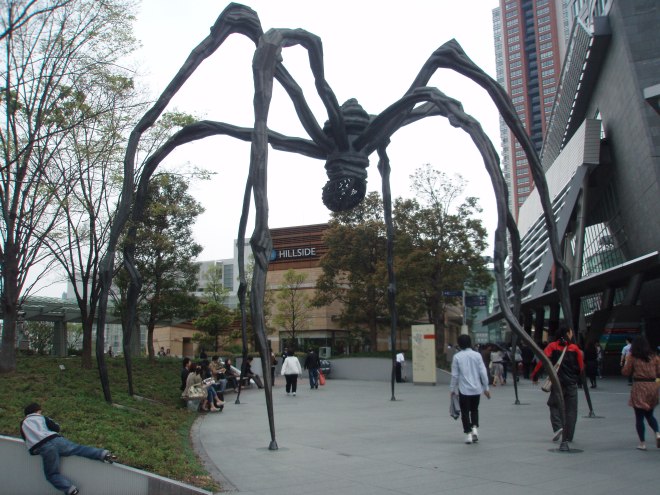 Then in a lace shop in Harajuku, where I bought a few bits of Japanese lace, there was a decorative tea-towel featuring the story of Nottingham lace. And in an ultra-expensive cafe in Ginza as I sat down (at last) and heroically drank a cup of green tea (when in Rome…) that was strong enough to put hairs on my chest, the ultra-slim, Channel-clad lunching ladies sipped delicately on Earl Grey and ate tiny sandwiches and slices of apple pie.

In truth, sitting down didn’t happen enough (sadly, I seemed to have left the rest-inducing heated loo seats behind in Kyoto) so I relied instead on a couple of reviving Suntory whiskies with dinner in the evenings and a few soothing-sounding Japanese baths that were, in reality, too hot to handle at 50-degrees! But I did sit down to watch a single act Kabuki play at the Kabukiza Theatre in Ginza. Kabuki is a highly stylised form of theatre (think highly painted faces, elaborate costumes, trapdoors and revolving sets) with plays usually based on historical events, moral conflicts or tales of love. Hiring earphones so I could listen to the plot in English was a great help and it was an enjoyable experience. I also had fun watching the theatre goers (this was after all posh Ginza) and noticed several women in kimonos.

On my penultimate day, restored by the freshest and most delicious sushi the night before, I went off to Yoyogi Park (where young people go to let off steam on a Sunday) and the nearby Meiji Shrine. It was a beautiful spring day and there were several Shinto weddings going on in the grounds of the Shrine. I saw one group being photographed, the women wearing white-hooded dresses and the men wide skirt-like trousers. Photographers ran around adjusting a tuck here and a fold there, nobody smiled and it all looked rather sombre.

By complete contrast, the Goths, the punks, Jane Austen and fairytale aficionados were all showing off their extravagant costumes in Yoyogi Park.

The Elvis impersonators (they are a fixture) were warming up, taping up their much-worn boots with masking tape, slicking back their hair and chewing gum before strutting their stuff to the muffled music of ghetto blasters that shared the same vintage as their shoes.

I couldn’t leave Tokyo without seeing the lights in Shibuya so I stopped off on my last night to immerse myself in the flashing neon and videos adorning the skyscrapers. But my favourite thing – a bronze statue of Hachiko dog outside Shibuya Station – had much more permanence to it. Owned by a professor, Hachiko would come to meet his master from the train every day. When the professor died in 1925 the dog continued to show up at the station every day until his own death in 1935. Surely a Japanese version of the Greyfriars Bobby? That brings me neatly back to dogs. Watch out for my next post on people watching at the dog park.

3 thoughts on “Life Laundry and armchair travel 3 of 3”