Walking into No.7 Blyth Grove in Workshop, Nottinghamshire, you’d be forgiven for thinking the Straw family were hoarders. Not the kind of hoarding that provides voyeuristic fodder for Reality TV shows – television hadn’t even been invented when the Straw family bought their semi-detached house in 1923 – theirs was more of a post First World War ‘Make Do and Mend’ approach.

The charm of the house is that little has been touched since 1932, giving a real life – rather than a museum curated – insight into a bygone era. William Straw was a prosperous tradesman, a seed merchant and grocer with a shop at the top end of town, and father to two sons, William and Walter. William senior died suddenly while gardening aged 68 in 1932 and his wife Florence passed away seven years later.

After the death of their parents the two boys continued to live in the house, keeping everything exactly as it was for the rest of their lives, William being the last to depart when he went to hospital in 1985. It’s almost as if the house is a shrine to their parents’ memory.  They kept the curtains closed to keep out the sun in Florence’s sitting room, her bible on the table, the French Empire-style clock on the mantelpiece, her music scores on the piano stool, the bookcase fully stocked and side board crowded with ornaments and china. Fortunately, for us and future generations, William bequeathed the property to the National Trust on his death in 1990. 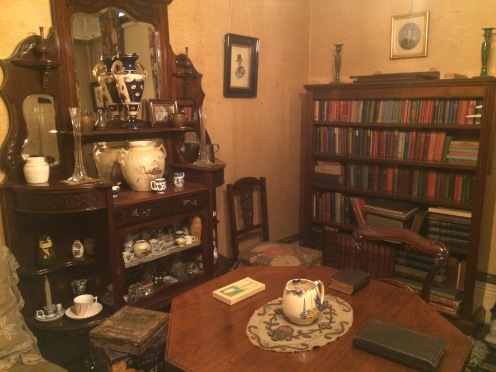 The dining room, which is to the right as you enter the front hall, where William senior’s coats, caps and hats still hang from pegs, is the room where time seems to have stood still. The calendar on the wall with a picture of two kittens is from 1932, William’s pipes and tobacco pouch and favourite chair to the left of the fireplace are as he left them. The walls are covered in dark wallpaper and hung with oil paintings, the furniture heavy and every surface laden with glass, china and pewter ornaments and collectables. 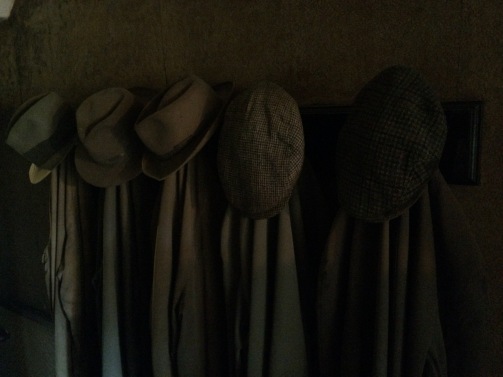 One of the most touching rooms in the house is the parents’ bedroom, where William’s detachable collars are still in a box on the dressing table with Florence’s diaries, gloves and the blue sunglasses she used on her annual seaside holiday in a drawer. The brass frame bed is heaped with Florence’s clothes perfectly preserved between layers of newspaper and carbolic soap to protect against moths. While the Straw parents hung onto everything ­– from postal correspondence to bills and old newspapers (even those that were delivered while they were on holiday) – there’s an air of thriftiness about the place. This wasn’t the age of fast fashion with flimsy throw-away items, worn just a few times, creating mountains of toxic waste in landfill sites, of electronic gadgets with built-in obsolescence or one in which plastic water bottles and takeaway food containers litter the landscape. 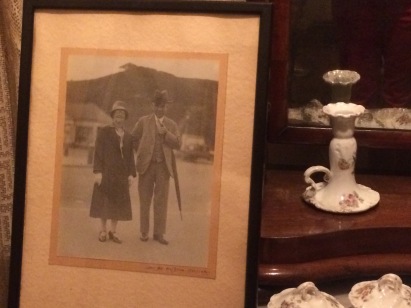 The Straws on their annual seaside holiday in Scarborough

Yet there’s a homeliness and cosiness amid all the paraphernalia, clutter and heavy furniture – possessions were an indicator of status and wealth in the 1920s. And, while the sons remained deeply resistant to change after their parents died, refusing to make way for modern conveniences as they became available such as phone, radio, central heating and television, their parents were not afraid to move with the fashions of the time. 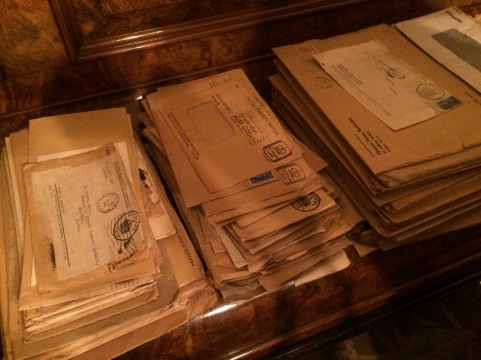 One of the first things you notice on entering the house, with its attractive stained glass door panels,  is the Axminster stair carpet bearing an Egyptian design, one that was very much in vogue following the discovery of Tutankhamun’s tomb in 1922. 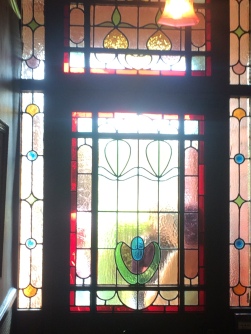 Before moving in, William Senior had all the rooms decorated with fashionable Sanderson wallpapers, dado and picture rails put up, new curtains, carpets and lino laid. And, in a concession to modernity, a new lavatory was installed in the bathroom, and in 1927, a new sink and bath were put in with two taps to accommodate the introduction of hot water.  Imagine two taps being a symbol of luxury! With exposed lead piping – I always think of Cluedo and whodunnit – it looks sparse to our modern tastes but, along with improvements to the electrical system, the Straws were very much up and coming. 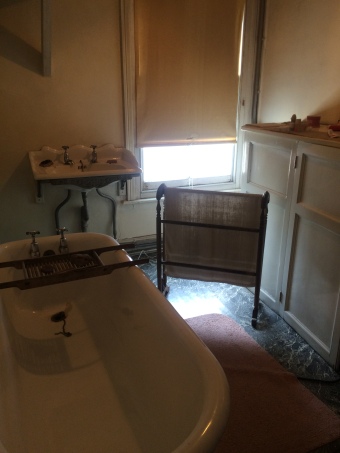 In 1940 William drew up an inventory of the entire ground floor of the house – down to every last packet of food in the kitchen cupboards –  and labelled some items of furniture. In common with the original owners of other house museums, the Straws documented their lives for posterity, whether consciously or unconsciously. What kind of legacy are we creating today in the absence of letters and hard copy documentation. Will our lives be digitally recorded and archived? What will happen to all our emails?

Curiously, the boys used a cupboard on the second-floor landing as a pantry. Sauces, tins, jars and bottles – some vintage such as Fowler’s Pure Cane Indian Treacle and some more modern such as a tin of Heinz baked beans – line the shelves. A lumber room on the same floor – probably originally a maid’s room (there are servants’ bells in the kitchen) served as a storeroom. It’s crammed with eclectic objects such as a foot-operated Baby Daisy vacuum cleaner, jars of home-made bottled jam, hat boxes, biscuit tins, wooden crates and a World War Two wardens’ helmet. 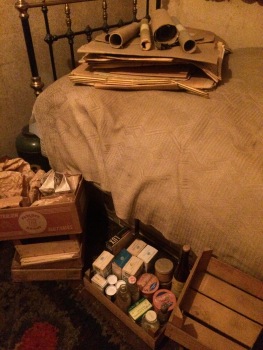 My family lived in Workshop, a small market and former mining town, in the 70s. I wonder if I ever passed William and Walter, both regular churchgoers (always sitting in the same pew) in their serge suits and bowler hats? What austere lives they led –baking bread once a week to their mother’s recipe and using her utensils, only ever lighting fires in two of the rooms even in the coldest months, their bachelor beds covered in checked blankets.  Little did I think I would return one day as a tourist from Australia thrilled to discover a time capsule of the Victorian and Edwardian Age. 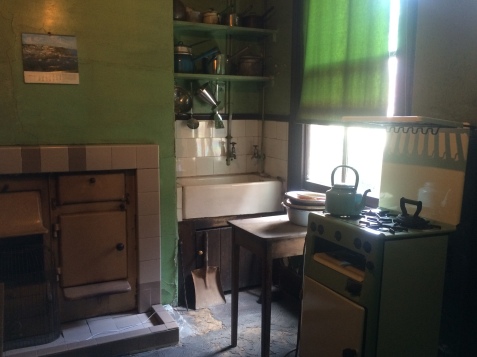