A few weeks ago, I was sitting under a Canary Island Pine tree (Pinus canariensis) weaving three-stranded pine needles through a re-purposed children’s trampoline safety net. It required great focus and flow, feeding the needles through the correct holes to maintain the pattern of what would become an 8-metre wall hanging. Sheltered from the wind on one of those less kind late summer days, I was taking part in a community art project known as Refuge. Created by artist Carmel Wallace from Portland, Victoria, Refuge celebrates and pays homage to trees as silent and enduring witnesses of the past. 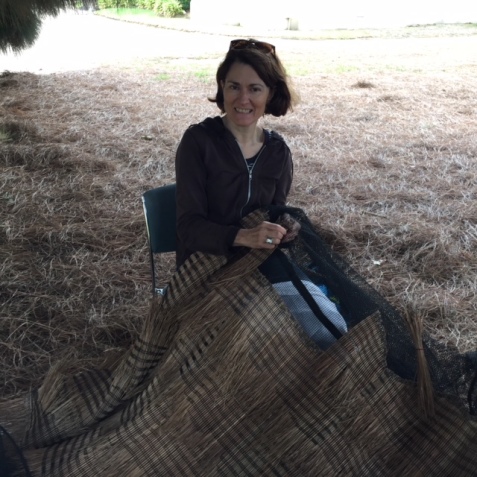 The Canary Island Pine is in Brighton’s Billilla Gardens, an English-style nineteenth century garden with lawns, trees (many of them non-natives), flower beds and a water fountain surrounding the Art Nouveau mansion built in 1878. Now owned by the Council but leased to a Jewish Orthodox school, the gardens are open to the public.  Other ‘migrant’ trees include two Bunya Bunya pines and a Canary Island Date Palm. Before the Suez Canal opened, the Canary Islands were a stopping-off point for sailors to the New World. Hence Carmel’s reference to trees as metaphors for Australia as a “nation enriched by displaced and transplanted peoples.” 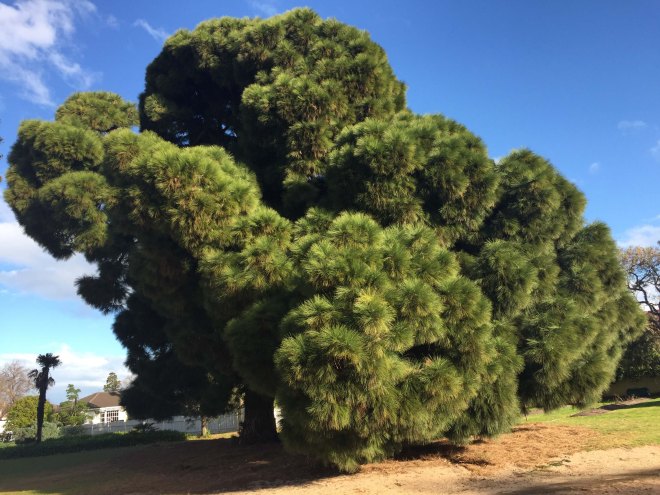 I have wandered many a time in the lush and leafy gardens, sometimes with my dog Bertie, or on summer days I sometimes go alone and lie under a tree with a book with just the rustling of trees for company. You can’t fail to spot the iconic Canary Island Pine with its distinctive shape. From the side it resembles the bustle on a Victorian dress with its backward curve. I love the way it commands the space. Sitting on a deep carpet of pine needles and weaving a row or two with Carmel, I discovered that the tree owes its singular form to a lightning strike in 1918 and that it is listed on the National Trust Register of Significant Trees.  You can see the scars where the tree has lost branches, but I’d never lingered long enough to notice the jewel-like beads of sticky resin. 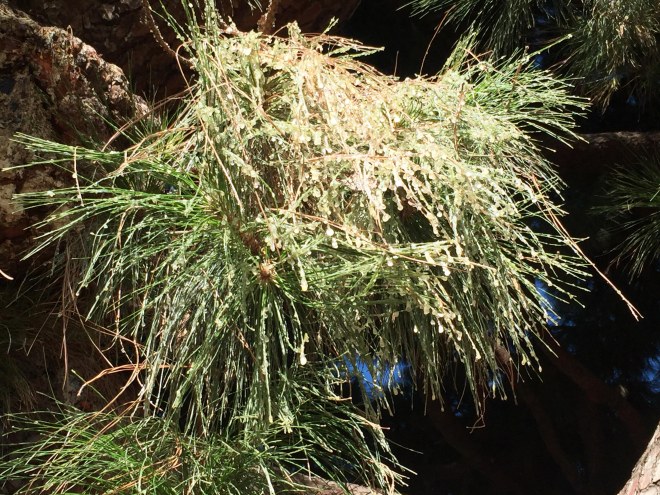 Standing under the broad canopy of the tree and looking up offers a quite different perspective; the mosaic of sky peeking through the gaps in the branches, the sparkling droplets of resin sparkling against the reddish bark and the vivid green of the pine needles.

Chandeliers made from spectacle lenses and electric cable

Carmel is  part of Bayside City Council’s Artist in Residence program and worked from one of Billilla’s studios – formerly one of the property’s outhouses. She uses variety of media in her work and often incorporates cast-off or recycled materials as part of an exploration into environmental awareness and ethics. Her studio is a magpie’s den of salvaged bits and pieces: spectacle lenses suspended on copper wire like chandeliers; a collection of drinking glasses and goblets from charity shops; wood, branches and leaves.  The glasses are part of a work inspired by Tiepolo’s Banquet of Cleopatra (1743-44) which represents Cleopatra wagering with Mark Anthony that she can stage a more lavish feast and outdo the latter’s excesses.

Eighty people from the community took part in the weaving, sharing stories under the tree, tapping back into the oral tradition of pre-literate societies. The process was timeless, meditative and encouraged contemplation, respect for nature and connection to the earth and community. Trees don’t rush, don’t judge, don’t gossip, complain or engage in conflict and warfare. They stand the test of time and bear witness to man-made and natural events.

The week of the launch of Refuge at Brighton Town Hall, I watched a program called Judy Dench: My Passion for Trees. One of the things I remember most is the story of a 1500-year-old yew tree in a churchyard in Surrey in the UK. Hidden inside its immense, hollowed-out girth is a cannon ball most likely dating from the English Civil War. The tree predates the church and would have been revered by the pagans and druids as a symbol of life and longevity. At the launch Carmel quoted from British author Robert McFarlane: “Witness-tree:” originally a tree that stood as a record of property boundaries, marked as such by scores in its bark. Now broadened to mean a tree that has seen remarkable things, that stands as “a repository for the past.”

It was a privilege being part of the work and seeing it unveiled at the 5th May launch.  Mixing with artists, arborists, neighbours and curators, we drank toasts to the tree and to Carmel with Prosecco, and even better, vodka that had been infused with a green pine cone. I can thoroughly recommend Vodka canariensis! For more information on Carmel visit www.carmelwallace.com 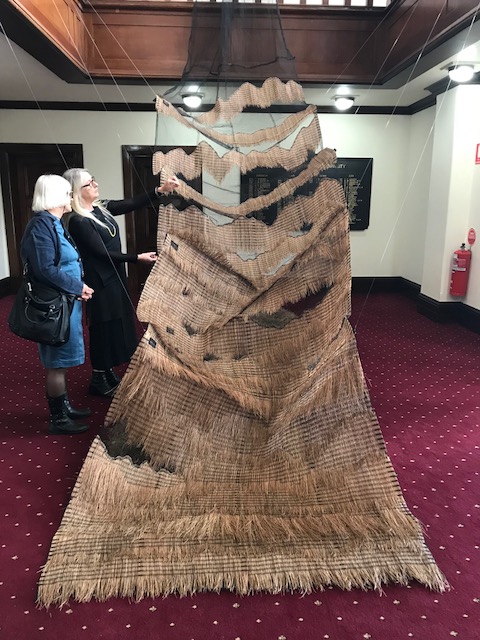