My mother loves the Royal Family and is fascinated by them. From all she’s read, observed and seen I think she thinks she knows them. I’m quite happy to join in. When I got to England in August she’d recorded a documentary and saved it for us to watch together. Prince Philip: The Plot to Make a King made fascinating viewing and started with his family’s flight from Greece in revolution when he was just a baby. Funnily enough, the same program screened recently here in Australia on SBS. Anyway, the reason I say all this is that it referred to a country residence owned by his German relatives, Wolfsgarten near Frankfurt, where he would sometimes spend the summer holidays.

My ears pricked up as I was due to stop in Frankfurt on the way back to Australia. A Google search revealed that the gardens at Wolfsgarten open twice a year, and, as luck would have it, my trip coincided with the autumn weekend, the Fuerstliche Gartenfest (Princely Garden Festival).

So it was that on a glorious autumn day in September – blue skies and temperatures in the low 20s – I found myself in the gardens of a former hunting lodge tucked away in the woods in Langen, just outside Frankfurt. I had envisaged an open garden but it turned out to be a garden design and outdoor living expo with stalls selling everything from garden furniture, plants and ornaments to hats, scarves, food and wine. 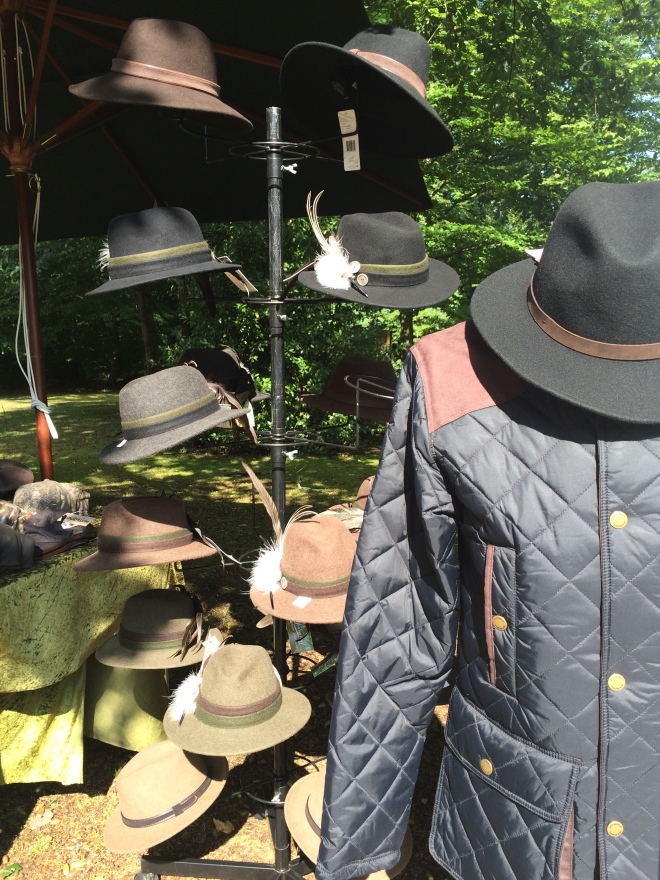 In the old orchard, amid ancient pear and apple trees, I stopped to admire a jumble of retro galvanised metal watering cans and enamelware. Then I came across a table laid out with heritage apple varieties in all their mismatched, variously coloured, un-waxed,un-polished, irregular glory. 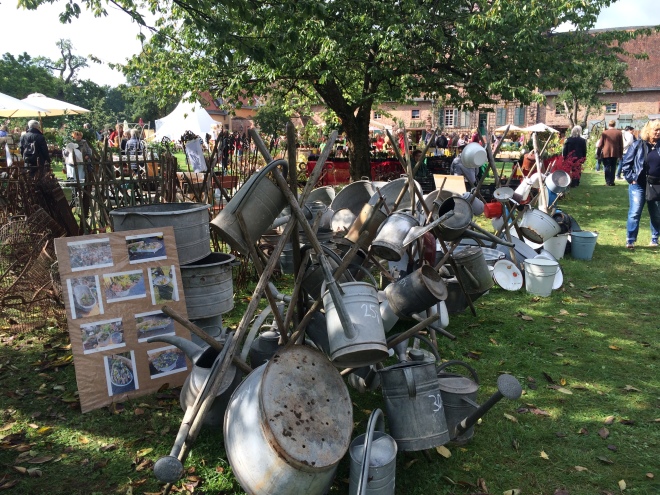 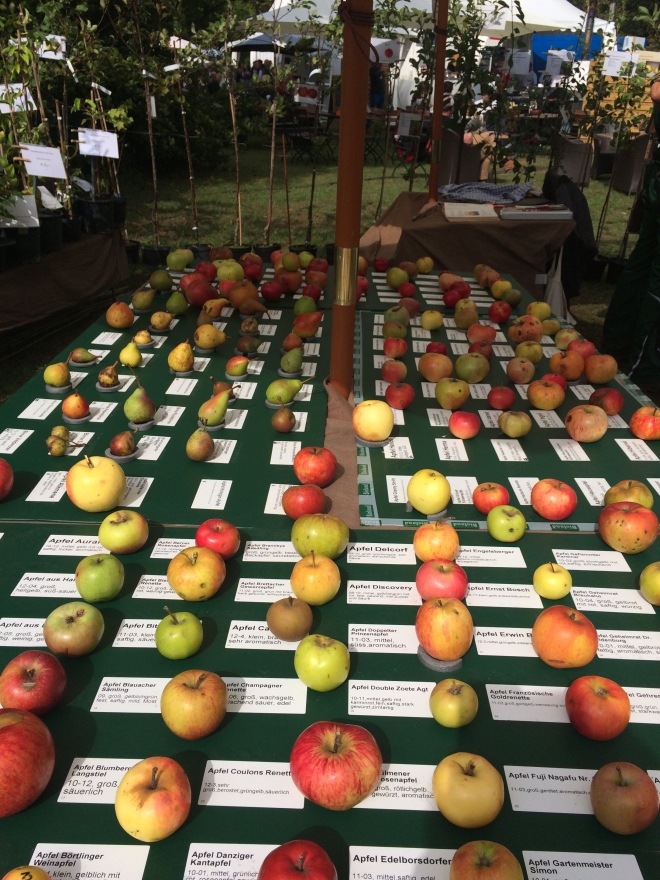 Strolling on through a courtyard and past a large imperial-style fountain, I came to the Japanese garden, an oasis of calm with Monet-like water lilies floating on the surface of the lake amid shimmering reflections of acers and willow trees. Another favourite place was the old half-covered swimming pool where a flower arranging competition was in full flow. And we’re not talking church rota type arrangements but lavish and exotic sculptures.

A bed of dahlias in reds, yellows and oranges (the theme of the show was ‘flammende Gaerten’ meaning flaming gardens, as in warm and hot colours) reminded me that, yes, it was autumn here even if I was days away from returning to spring in Australia.

Lots of stalls were selling edible treats: I sampled truffle-infused honey; salt infused with cornflower petals; variously aged Gruyere cheeses; and baked apple chips on offer at a wholefood store where a lean, lanky guy with sandals and a beard (a cliché but true) was promoting the nutritional benefits with evangelical enthusiasm. With the rigorous Australian customs regulations in mind, I decided against buying the honey and the apples but did get some of the salt. It’s blue and turns my scrambled eggs green! Other treasures I would have loved to bring back include a pink-painted ladder and an Ark-like collection of brightly painted animals. 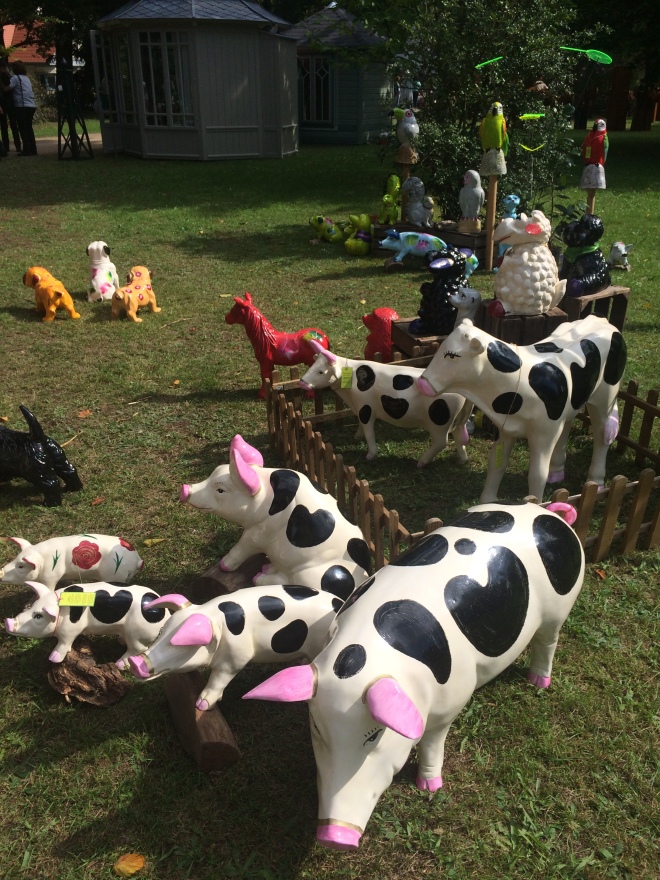 Wandering around, I listened to a string quartet, ate my home-made picnic (smuggled out of the hotel breakfast bar), supped on mint tea at one of the many stalls selling Moroccan sweetmeats and got chatting to a like-minded local woman in a courtyard where cheeky putti angels sat atop the garden walls. 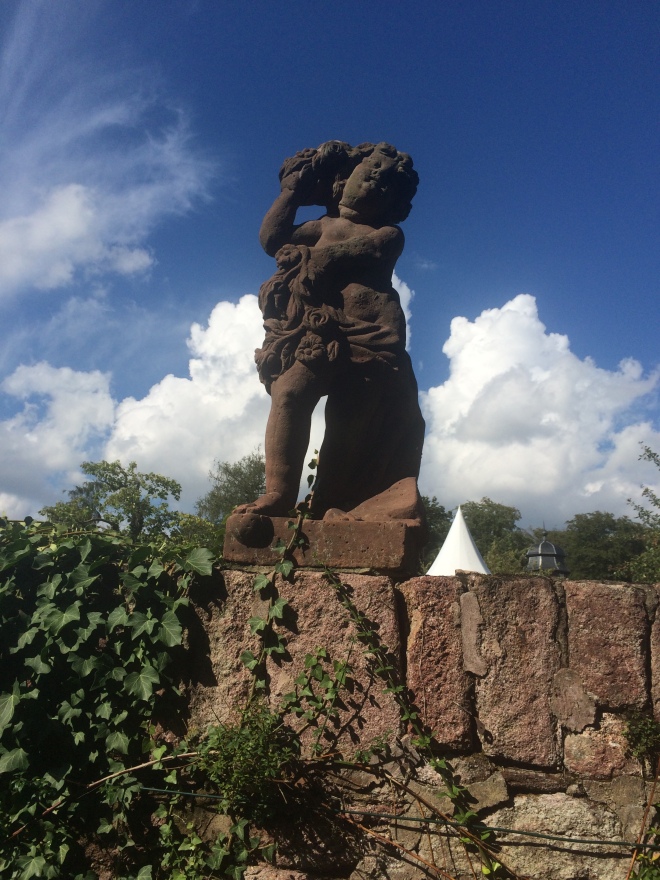 Wolfsgarten is surrounded by woodland – there’s something special about German forests that goes beyond Black Forest Gateau fame; in fact I spotted a red squirrel (a rare thing since the introduced greys have taken over) on my way to the station – and was a very special find. I felt a deep wave of happiness walking round the gardens and a renewed love for Europe, its history, languages and culture.

Another bonus was that the hotel where I was staying was just three stops away from Wolfsgarten. Searching for something affordable yet elegant, I remembered Hotel Wessinger from the 90s when I went to Frankfurt for the International Book Fair as part of my job The Wessinger was good then – small and family run with its own chocolate shop and patisserie – but it’s recently been renovated and now has a fabulous pool and spa, which I made good use of.

After cheap guesthouses and/or Airbnb places the last few trips, it was a treat, and I ate in the excellent restaurant every night. I also had a drink in the bar, a cosy place suited to tea with your aunt or a drink with a business colleague, two of the nights. I wheeled out my best German for the barman only to discover he was Irish, and flirty at that. Calling me young lady, he assured me I was only as young as the man I was currently feeling. Had that been the case, it would have taken about twenty years off me; I discovered he was a mere whippersnapper born in the 80s. On my last night he asked what my plans were for the evening and was most insistent that I join him for a nightcap, adding that he would be around till 1 a.m. Flattered as I was (golly, can I still pull?!), he was a bit of a lush and I preferred to save my energy for shopping at the flea market the next day.

As well as the flea market, I explored the arty/studenty area of Sachsenhausen and had fun browsing in a olde worlde crime fiction bookshop with a spiral staircase. I bought a few books but restricted myself to avoid excess luggage. I asked the ladies in the shop if baggage in the German language can mean emotional as well as physical baggage. I told them I was writing a humorous, warts ‘n’ all memoir, formerly an A-Z. We came up with a good opening line: Charlotte always had so much baggage…

The baggage problem became a self-fulfilling prophecy after the flea market and I had to cram my cases to the gills! I’m always a bit sad to leave Europe so like to buy up a few souvenirs – that’s my excuse anyway!

One thought on “Princely gardens, barmen and baggage”