Sitting at a favourite beachside café recently, I spotted among the display of black and white photos one featuring a group of World War 1 soldiers on the beach.  According to the caption they were on leave or recovering from injury – there was a Rehabilitation Hospital in nearby Hampton. How they must have savoured escaping the squalor and carnage of the trenches. 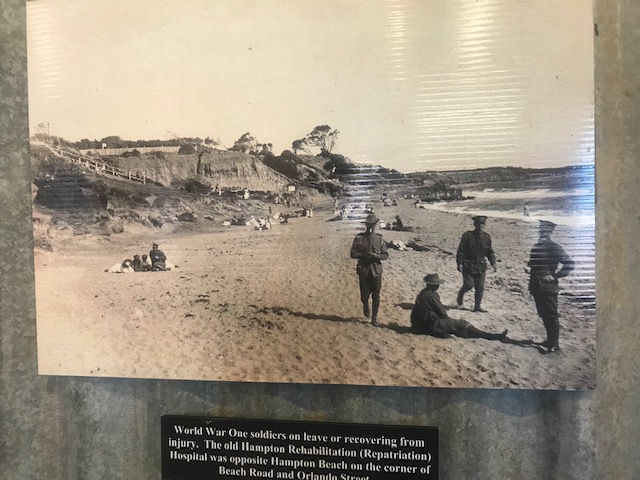 Although films and books such as Sebastian Faulks’ Birdsong have informed my knowledge of the Great War – the war that was to put an end to all wars – I never studied it formally in school. Even if I had, the focus would have been on the battles, movements of troops around the various fronts, logistics and numbers rather than the human stories.

A friend of mine curated an an exhibition at the Melbourne Museum called Love and Sorrow, documenting the wartime experience of eight service personnel and their families. The exhibition was on for two years but, as it turned out, I got to see it the week before it closed – just before the Centenary of World War 1 in November last year.The exhibition started with the propaganda posters and parades extolling the virtues of courage, patriotism and duty. But following the trajectory of the eight characters and their families through photos, scrapbooks, letters, diaries and other personal effects, it soon became a story of separation, loss, trauma, mental and emotional disfigurement.

One mother, on hearing her son was missing in action, was catapulted into premature senility, another sent her husband their new baby’s booties only to have them sent back – redirected – in the same envelope. How chilling it must have been to read the words: Return to Sender.  One of the most confronting sections was ‘Men with Broken Faces’ – before the advent of sophisticated technology and plastic surgery, facial reconstruction methods were cumbersome and crude. One man who underwent surgery never went out in public without wearing a scarf over his mouth, his self-esteem and confidence as shattered as his jawbone.

One of the more positive stories concerned Lil Mackenzie, an enormously plucky nurse who cared for patients in France and Italy close to the front-lines. She was summoned to Buckingham Palace to receive a Royal Red Cross 2nd Class for her outstanding public service. On returning to Australia, Lil and her sisters set up a care home in Boronia, Melbourne, and many of her patients were veterans. She lived to 90 but suffered bouts of depression after the war; no one came back from WW1 without some form of physical or mental scarring.

The statistics were sobering too: over 60,000 Australians died in the war and thousands more went on to die of war injuries out of a population of only five million people. The stories of the eight characters got under my skin, and their sacrifice and suffering lent context and poignancy to a Centenary of Armistice 2018 service that I attended at Green Point overlooking the Bay in Brighton. As the Last Post sounded before the one-minute silence, I thought of all those who had set out with ideas of glory and heroism and either lost their lives or returned broken, tearing families, friends and communities apart. 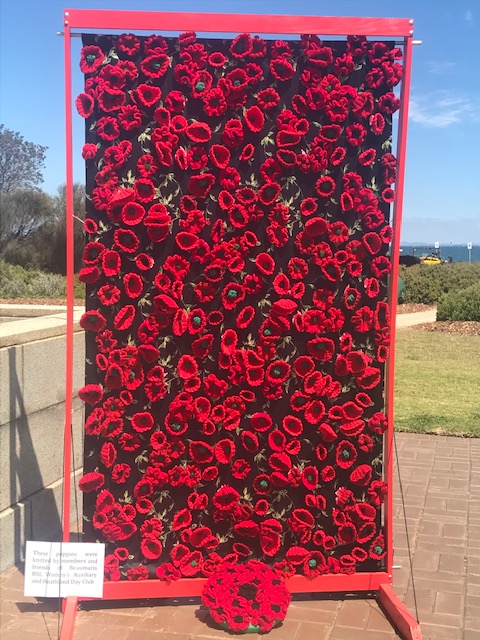 Soon after, I spotted Peter Jackson’s (Lord of the Rings) film They Shall Not Grow Old, which was on limited release in Australia.  This extraordinary film co-commissioned by 14-18 NOW and The Imperial War Museum in London in association with the BBC used original footage from the trenches (stored in the Imperial War Museum’s archives) and used modern day technology to deliver it to us in colour.  Using oral histories from surviving British veterans as the soundtrack and actors voicing beyond-the-grave dialogue based on forensic lip-reading of the silent footage, this film is a tour de force and offers a visceral snapshot of life in the trenches and on the frontline. The oral histories were recorded by the Imperial War Museum in the 1960s around the 50th Anniversary of WW1, the first time the human element of the war was captured.

What struck me was the no-nonsense approach of the soldiers who approached the war as a job they had to get done whatever it took. Resilient, hard-working, committed and uncomplaining they got on with it. Watching footage of them enlisting (many lied about their age to qualify and none had an ounce of spare flesh– no fast food in those days), it was clear that they had to take whatever boots, shirts and uniforms they were given, irrespective of the fit. And they only had one change of shirt. Quite apart from the bombing, bloodshed and loss of life, life in the trenches was gruelling; from dysentery to rats, lice, the stench of rotting bodies, foot rot, frostbite, lack of sleep and the general filth and all-pervasive mud. And, yet, such camaraderie and mutual concern among the soldiers as well as an ability to make the most of any down time –playing cards, laughing, joking, telling stories and, of course, smoking. Lots of that back then.

My immersion in all things WW1 prompted me to ask an uncle about our own family’s involvement. My great-grandfather and two great uncles served in the war but, amazingly, they all survived; how I wish I had known enough to ask them questions while they were still alive.

However, my uncle did share a wonderful story of a musical legacy. In the 1890s a Belgian family came to live in England and in 1904 the father gave his musically-gifted son a black cello. So talented was the boy that he played for Queen Victoria. But in 1914 with the advent of the war, he packed the cello away and went to the front to fight for the British army. Senior officers heard that that the boy was a virtuoso player and gave him ten days leave to return to the UK to get his cello so that he could play for the troops. The cello got damaged along the way but was glued together and survived the war as did the man, who went on to teach cello at the famous independent school, Eton. Cut to 12 November 2018 and a contemporary pupil played part of Elgar’s Cello Concerto on the very same black cello as part of a Centenary Remembrance Service for the 1570 Old Etonians who were killed in World War. If that cello could talk, I wonder what stories it would have to tell.