I recently read I am, I am, I am by Irish writer Maggie O’Farrell, an account of her Seventeen Brushes with Death. In one of the episodes she’s at a luxury resort in East Africa as part of a press trip.  She brilliantly sums up the claustrophobic level of attention to guest needs, their every whim indulged, as she seeks refuge in the sea.

“No one is in danger of rushing towards me with an ice-bucket, a finger-bowl, a complimentary tray of hand-made chocolates.  No one is trying to clean the sea.”

Although in recent years, I’ve sometimes upgraded to Premium Economy flights and from shared house Airbnb accommodation to boutique hotel, for much of my life budget travel – think 2 to 3-star hostels and hotels, packed lunches (or sandwiches made at breakfast and smuggled out of hotel buffets), DIY holidays and everything BYO – has been the go.  Whereas I’ve always liked comfort and my ‘Princess and the Pea’ tendencies have increased when it comes to beds, I am also a big fan of learn as you go experiences.

I recently had a small taste of the luxury end of the market when I met up with my mother (we met halfway between the UK and Australia before flying on to Melbourne) at the Mandarin Oriental Hotel in Singapore. It’s large, sleek, formal and rather sombre with a glass lift at the heart of the place whirling guests between floors. Yes, the beds were super comfy and the high thread count sheets gloriously soft, but the much-advertised breakfast buffet, where everything from Indian to Asian, Western and American was on offer, offered quantity over quality. With many of the dishes sweating under a hot lamp, you could have got the same fare at a Little Chef motorway café in the UK. And although the staff were impressively attentive remembering our names, newspaper, dietary and tea and coffee preferences on the second day, it felt a little intrusive and a bit obsequious. Just because I had camomile tea on day one doesn’t mean I wanted it again on day two. I simply wanted to make my own choices and be left in peace.  At one point, a waiter adjusted the lid on my teapot as he came past our table.

The one time I managed to get down to the pool, a white fluffy towel and robe magically appeared along with a glass of iced water. But it started to rain when I got into the water which was fine by me, but not by the attendant who told me the rules forbade swimming in the rain. Luxury is not just suffocating, it can be bossy too!

The Singapore experience prompted me to look back on some of my memorable travel experiences, and none of them involved luxury.  Back in the 80s a school friend and I went to Galicia in Northern Spain. We arrived in the town of Pontevedra on a fiesta weekend to find a no room at the inn situation. The only room we could find was above a bar and it had a bare light bulb, sagging beds and the loo in the bathroom along the corridor had no seat. But we had a fabulous time; that night we met a charming couple José and Maribel who invited us to join them for dinner – they were cooking fresh sardines over repurposed oil drums. How deliciously fresh, meaty and smoky they were, complemented by the local rosé wine. Jose took us on a drive the next day and we stayed in touch for a few years after that.

Later in the trip we travelled by overnight train in a sleeper compartment from La Coruña to Madrid. We’d come straight from the beach and our bikini bottoms were still gritty with sand. A man with a dark five o’clock shadow and reeking of garlic came into our compartment early in the night and claimed the third of four bunks.  After a few station stops where, each time, travellers would slide open the door to our compartment in search of a bed, garlic man got up, swearing a very Spanish joder (Google it!) and locked the door. Terrified as to his motives, we whispered frantic contingency plans, but soon realised that he simply wanted to get a good night’s sleep without disturbance.  Selfish maybe, but not a sexual deviant, his swearing was replaced by snores. No joder simply a bit of roncar!

A 1990s holiday in a rental house in the South of France with a bunch of friends relied on simple pleasures: self-catering, walks, reading, swimming in the lake, drinking wine and playing silly games in the evening. One night we went to a local festival of music and, after a few glasses of wine, ended up dancing with total abandon on the roof of our hire car. And then we visited a restaurant specialising in all things duck starting with jambon de canard (cured meat like parma ham) followed by duck pâté, pâté de foie gras and then roast duck. I’d never tasted foie gras before and wanted to know if they sold tins of it. I asked – in all innocence – “avez vous du foie gras dans un préservatif?” Which caused an explosion of mirth – I had asked whether they sold foie gras in condoms! 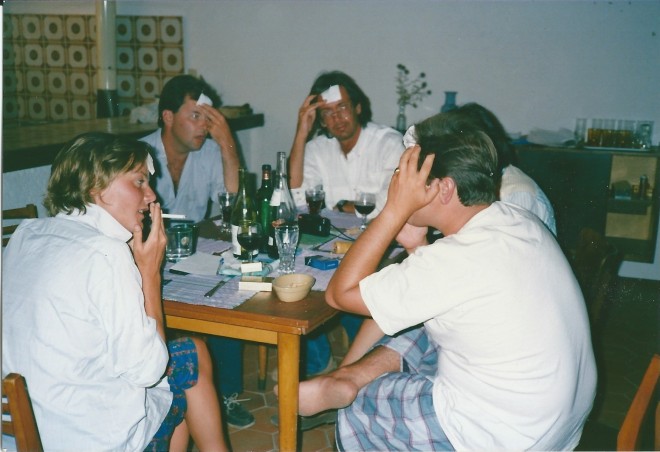 Playing ‘Who Are you?

And that’s my quibble with in-your-face luxury; all that pampering and pre-empting of one’s every need takes away the joy of discovery, the journeying, exploring and mishaps along the way. And I feel uncomfortable around the servile attitude of those delivering a luxury service. It all feels like a throwback to colonial times.

I’ll never forget the expert massage I received from a hill tribe woman in the Chang Mai region in Thailand back in the 80s. I was stiff from trekking and she walked on my back, pushed and pulled and smoothed out all the knots. It was bliss. Yet there were no dolphin music or pan pipes in the background, no white robes, scented candles or oils.  Simple pleasures.

In the words of Eugene Fodor: “You don’t have to be rich to travel well.”