When is a polar bear not a polar bear? When it’s upside-down, seven-foot tall and made of fibreglass. The Wild Card #6 (polar) by Louise Paramor was this year’s winner at the Lorne Sculpture Biennale. It probably wouldn’t have got my vote, but it was fun and eye-catching, and I liked the playful juxtaposition of an Arctic mammal with a banana sun lounger framed by the Pier and the beach. 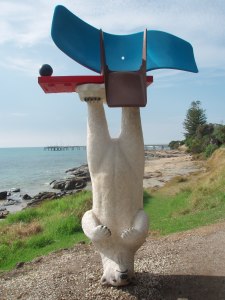 With 40 sculptures all along the shoreline from the Pier up to the Swing Bridge it was a leisurely stroll through an al fresco gallery of works in all shapes and size crafted from materials ranging from pressed tin to metal, steel, mattress springs, rope, wood, chrome, stone, cloth and even bedding plants. Some works, like the polar bear, were playful, some purely aesthetic and some conveyed a more serious message or meaning.

One of the most powerful was Richard Savage’s Terror Australis. Inspired by a photo taken in Roebourne Gaol in 1896, the sculpture is of a group of nine aboriginal figures constructed from rusted chains and all joined together by padlocked neck chains. It’s a work that embodies subjugation, enslavement, inhumanity and domination. And, of course, the title is a brilliant play on words. Here’s the author’s statement from the exhibition catalogue:

“Aborigines have been treated like animals or worse since White Occupation. They have been murdered, removed from their lands and have had their children taken from them. No humiliation was too much: chaining Aborigines, guilty or innocent, allowed pastoralists, miners and other white interests to take Aboriginal land with impunity. This is European justice: really it’s no justice at all.”

“ My sculpture is based on a photo taken outside Roebourne Gaol in 1896. Its smiling constables reminded me of the Abu Ghraib photos from the Iraq War”

This was coastal art at its best without all the hubbub, traffic, parking hassles and general hiatus that comes with city living. There is of course plenty of culture outside the city. My first weekend down here, there was an Open Mic Music Festival in nearby Aireys Inlet. It was pretty impressive with over 160 performances across nine different stages, and it was all FREE! Excellent for a Home Renovating Sea Changer! One of the acts I enjoyed most was a female duo called Bush and Bird. They did a wonderfully earthy rendition of Dolly Parton’s Jolene followed by Nancy Sinatra’s These Boots Are Made For Walkin’. Another highlight was a young male singer performing Leonard Cohen’s Hallelujah.

The next big cultural event in my calendar is the Lighthouse Literary Fest, also at Aireys Inlet, over Anzac Weekend. Being the forward-planning type I bought a weekend pass back in February and I’m glad I did as tickets sold out by the end of February. It’s going to be held at the newly renovated Fairhaven Surf Life Saving Club so it really will be books by the beach. The event has attracted some big names including Robert Drewe, Martin Flanagan, Bruce Pascoe, Sigrid Thornton and many more, and the sessions are sure to be thought-provoking:(Writing About Parents, Between Fact & Fiction, The Treacherous Writer (would you risk a friendship for a story?) and Shy People & Show-offs (all about memoir writing). Can’t wait!

I won’t be able to take Bertie along to the writers’ festival so might ask my lovely beachside neighbours to look after him for two half days. That was the lovely thing about Lorne. Bertie came with us and sniffed his way along the trail. I recently purchased a ‘Gentle Leader’ harness and it’s changed my life; I can now take him for walks on the leash without him pulling my shoulders out of their sockets.

The day was all the more pleasurable as I was with my friend Nicki, who is Bertie’s godmother (yes, he is her one and only godspaniel), and his new honorary godfather Graeme. And Bertie did indeed find his inner artiste. He dug like mad and created a very unique sand sculpture. He’s very talented is my boy. Even if I say so myself.