I recently read an article about people in the over 60s age bracket making a bit of extra retirement income through Airbnb hosting. The article instanced a couple in WA who were waxing lyrical about sharing their 12-acre property with their guests, who are housed in a small cottage next to the main house and enjoy lots of home comforts and perks such as freshly laid eggs for breakfast. Sounds blissful doesn’t it? Arm’s length hosting must be very cruisy, but what about those of us who are sharing our space with our guests?

When I started offering my spare room on Airbnb in December 2015, my first guests were two Italian girls. They arrived in the middle of the night and continued to keep Night Owl hours throughout their stay, often snagging me in long conversations and tourist map reading sessions at 11 p.m. at night, all the while boiling up their pasta and frying steaks. One night I lay awake worried that they had missed the last train – they had – and on another occasion they walked round the house at 1 a.m. talking animatedly on Skype with their relatives back home.

Then there was the young French guy who I almost gave up for dead when he failed to emerge from his room until 7 o’clock at night. His mother (an Airbnb host herself), who had made the booking, sent me a flurry of texts in French shortly before he arrived asking me if I knew of a chiropractor as he had a trapped nerve in his shoulder. He arrived mid-afternoon and went straight to sleep. I then drove him to the appointment, and afterwards he took the train to the CBD and stayed out, so he told me in his three waking hours the next day, until 5 a.m. Although he smoked outside, it took me several days and scented candles to get rid of the smell of cheap aftershave from his room.

My second guests were a delightful American couple who were riding round Australia on a custom-made tandem bicycle. We all got on fine and I didn’t mind them using the kitchen or Dan watching TV into the wee small hours, but I had to smile when they ate their toast, jam and peanut butter on pieces of kitchen paper rather than on plates.

By contrast, the very friendly Malaysian mother and son pretty much used my place as a dormitory. They may have put a carton of milk in the fridge but were otherwise out from about 10 a.m. to 10 p.m. Perfect! But lovely as they were, they left the bathroom floor awash, their room stank, really stank, of tiger balm when they left (emptying the bin I could see his mother was taking medication for osteoarthritis), and I also discovered dark purple henna stains on the carpet. Luckily my solution dyed nylon carpet is very forgiving when it comes to stains.

What and how guests eat can be quite revealing. A Chinese mother and her 14-year-old son, who stayed recently seemed to be at a loss when it came to breakfast time. I don’t offer breakfast unless guests request it, but Jane’s English was pretty patchy so maybe she had misunderstood. I zoomed into action and put some banana loaf and scones to heat in the oven. But as they were heating up, Jane remembered she had provisions and came back clutching some stale bread rolls she had bought in transit in Hong Kong. She eschewed my offer of butter and jam and stuffed down the bread with gulps of milk. The son then yawned his way into the kitchen nibbling on a skewer of congealed meat. It turned out that the pork skewer also originated in Hong Kong. Amazed that the meat had not been detected by customs, I calculated that it was at least 36 hours’ old (they had arrived in Melbourne at 6.25 a.m. the previous morning) and had been out of the refrigerator all that time. Needless to say the child had a stomach upset the next day.

But my most recent guests – a couple of 20-something Japanese girls – really do take the biscuit(s) when it comes to culinary quirkiness and kitchen aggravation. They only ate out one night in six. From fried fish to home-made beefburgers and stir-fries, they seemed to be at the stove morning and night, using metal implements in my non-stick pans and washing up under a cold running tap. My tension levels rose and I could feel my jaw clenching every time they came back bearing heavy bags of groceries. Oh no! Not ANOTHER cook-up?! Like a guest in my own house, one night I asked to use the kitchen first so they started to wash the rice in their bathroom to speed things up. Later on they let the rice burn dry and the whole house smelt of charred rice. Never mind, they were going to the Great Ocean Road the next day and I would have the house to myself. So I thought. But they didn’t leave till 10.30 a.m. as they were busy boiling up more rice to make sushi which they filled with spam. Spam sushi?!!

I was out on their last night but got back in time to find them frying up a bit of leftover spam. Euphoric at the prospect of them leaving the following morning, I shared with them the Monty Python spam sketch on YouTube and taught them to sing Spam, Spam, Spam. I put all the pans away before I went to bed and left them scouring the burnt rice pan with a steel wool sponge.

But when I got back from walking Bertie on the beach the next morning, they were back at the stove again, frying up MORE spam, boiling eggs (the replacement eggs they had bought me) and making toast. Then, to my amazement, one of the girls, Hiro, went into the freezer and put a huge dollop of salted caramel ice cream (I had offered them ice cream the first night) on top of a piece of toast. Spam, eggs, cashew nuts, spinach and ice cream all on one plate. Then, as they were getting ready to leave, they asked if they could take the biscuits I had put in their room, container and all. Noticing that they had snaffled all the tea bags too, I wrapped the biscuits in cling film and handed them over. Anything to get them out the door. It really does take all sorts to make a world. 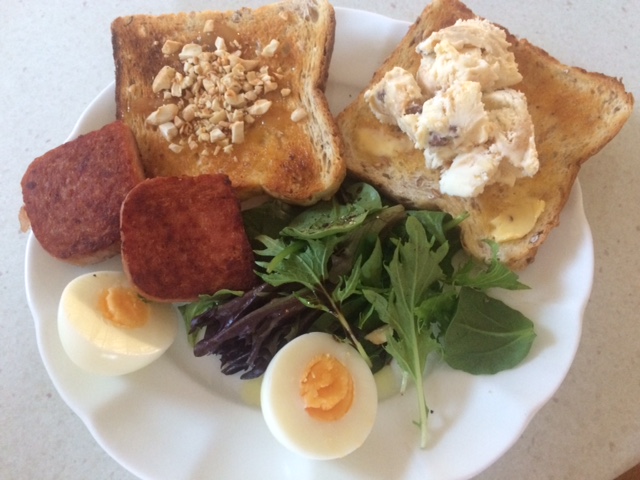