I learnt a marvellous new word courtesy of my American guests over the Festive Season, namely honey-do, a chore or task performed by one’s partner, husband or significant other around the house or garden as in “Honey, could you do x, y and z?’

My Christmas holidays were much busier than I planned. In addition to the emotional tripwires that creep up on me every Yuletide (missing family and traditions in the Northern Hemisphere, end of year fatigue, a bit of the Bridget Jones Blues, and this year, midlife angst about my career and earning potential or lack thereof), I seemed to be very much on the go, which, of course, is one way of avoiding the difficult stuff swirling around in my head.

What with Airbnb guests (yes, we’ve had lift off and I’m on my third booking), parties and social gatherings, gardening, cooking (including special home-made dog biscuits for Bertie), cleaning, buying new fans, returning faulty fans and choosing new models that actually work, household honey-dos, dog walking, grooming and shampooing and a LOT of chatting, I got into a rather over-stimulated spin. Then this week, the week I had set aside to mellow out and finally relax, I started to look for jobs (a job in itself), and then yesterday got locked out of my house.

Giulia, one of my first Airbnb guests and now a temporary flat-mate, locked the screen door as she was unable to close the front door. I had left it on the latch so she was doing the right thing by securing the property. What she didn’t realise is that my screen key came off my key ring a few weeks ago and has remained on the kitchen bench ever since. All a learning curve: Note to self – be clear about screen door with guests and make sure everyone including me has a full set of keys!

It’s been a new thing for me having not just one but two people in my house (the spare room is twin-bedded). Most of the time it’s fun having congenial company and ready-made dinner, movie and dog-walking companions, but there are times when I need to slink off to a quiet corner and read or simply NOT talk.

Dan and Vickie hail from Colorado and are cycling across Australia on their beautiful custom-made tandem. Amazingly, the whole bike (see picture) can be disassembled and fitted into a couple of cases. They started their Australian journey in Sydney before riding down to Melbourne and around Tassie. They came to me in preparation for the next leg of their journey to Adelaide via the Mornington Peninsula and Great Ocean Road. From Adelaide they are following the coast and crossing the Nullarbor to Perth. Not a trip for the faint-hearted! 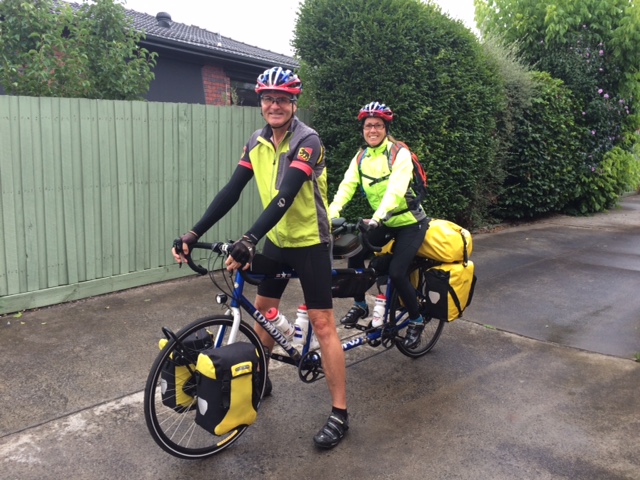 They were with me for a couple of weeks and we started out by having dinner together at an excellent Turkish restaurant on Christmas Eve and finished up with an evening spent building self-assembly fans. As you do. Dan is a star honey-doer and helped me prune tall shrubs, take the bins out, hammer down rough nails on a couple of carpet dividers, rig up a way of keeping the laundry (Bertie’s bedroom) ventilated on hot nights, search under the washing machine for a missing pearl earring and much more. He even helped me word a difficult text. How nice it was to have a house husband! 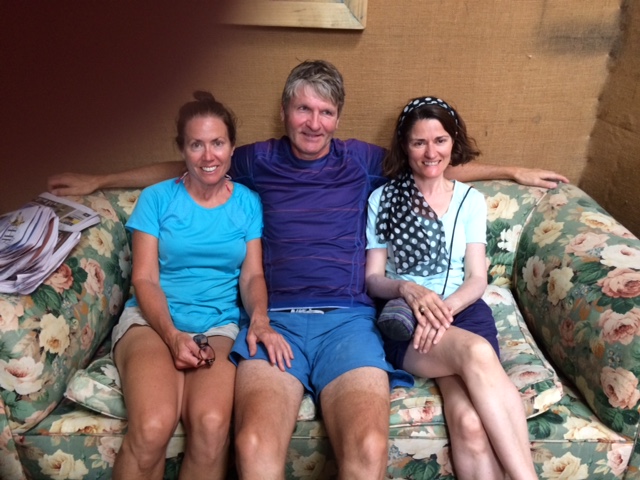 Breakfast at the Sandy Beach Kiosk with Dan and Vickie

Had Dan been here yesterday I wonder if he’d have found of way of opening the screen door without the key! As it was I had to drive to the Monash Campus (not my favourite place owing to a job from hell last year) where Giulia is studying. I do have a local honey-doer though – my brother. Like Dan, he’s practical, solutions-driven and likes a challenge. On Wednesday just as the mercury hit 35, my air-conditioner failed to work. As luck would have it my brother was passing by and came in to investigate. I was ready for the worst – last time it went wrong and I called out a service guy, it cost in the region of $800. Just what I don’t need on top of the midlife career crisis! After tinkering with the inside controls, Tim went outside and turned the unit on and off in an effort to ‘re-boot’ it. And it worked and is still working. What a star!

Then, last night, I decided to have one last look for the missing pearl earring. I lost it about a week ago when I had come in from walking Bertie. I heard it drop – a soft drop – while I was in the laundry but there was no sign of it anywhere despite Dan’s inventive use of a coat-hanger to sweep under the washing machine. I bought the earrings back in 2009 when I was on Thursday Island. They are high quality pearls and I love them. So you can imagine my delight when I re-checked the pocket of the jacket I had been wearing. There was the missing pearl in the inside pocket. I didn’t even know there was an inside pocket.

It’s been a funny few weeks and I’ve been rather topsy-turvy but I’m now Girl with Two Pearl Earrings and a Functioning Air-Conditioner and am counting my blessings! What’s more, last night I chanced upon one of the most stunning sunsets ever. Enough to lift anyone’s spirits!