Being a tourist in a city where I once lived  as a worker, commuter, tax payer and home-owner is a joy. It’s an absence makes the heart grow fonder scenario. Although I made the most of London when I lived there from 1987 to 1996, there’s nothing sweeter than returning, unencumbered by day to day responsibilities, with the time and space to experience the place afresh, and inspired by the appreciative perspective of a long-distance traveller. Google tells me London is 10,497 miles away from Melbourne.

This time I tapped into a bit of glamour with dinner at the Athenauem Club in Pall Mall, one of London’s oldest clubs which counts 52 past and present Nobel Prize winners among its members and has oil paintings of Dickens, Darwin and other dignitaries lining the walls. Another night, my sister took me to the theatre to see the Ferryman by Jez Butterworth at the Gielgud Theatre in Piccadilly. The play set in the 80s about four generations of an Irish family was mesmerising with 22 actors on stage at one time plus a live rabbit and a real-life baby. It’s a tale of grief, disappearance and loss – an aunt to dementia and an elder son’s body is found in the bog. Woven throughout the family narrative are myth, magic, ‘the Troubles’ and the corrosive and threatening presence of the IRA.

Before the theatre we strolled through the Burlington Arcade admiring its high-end jewellery, leather, cashmere, shoe and perfume stores all so exclusive that, in most cases, you must ring the bell to be admitted. For fun, we enquired about the price of a beautiful pearl necklace only to find it was £77,000!

As if to bring things down to earth – albeit in an airborne way – the ceiling space in the Arcade featured the work of French artist Mathilde Nivet whose 300 bird sculptures, painstakingly crafted from paper, fluttered overhead. 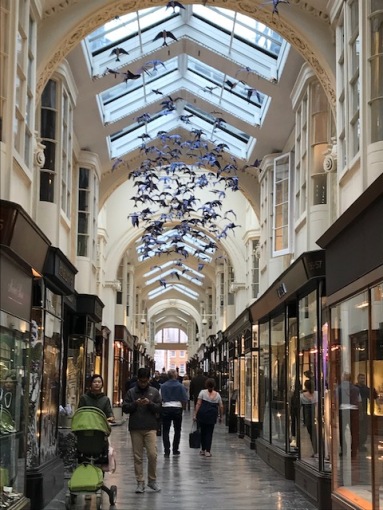 After that it was onto Fortnum & Mason known as Fortnum’s for short, an elegant and gracious store with its plush red carpet and spiral staircase connecting the floors selling luxury hampers, teas, coffees, cheeses, biscuits and fine wines all presented in its trademark green tins or boxes. It’s a bit like entering a fairy tale until you come to pay the bill. 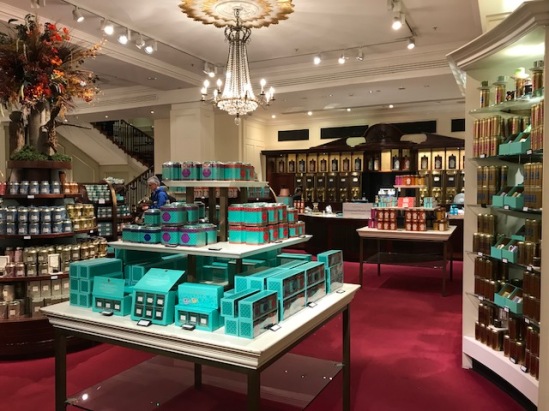 A quick trip to the Victoria & Albert Museum offered plenty of contrast. An exhibition about plywood  showed how layering cross-grained veneers to make material stronger than solid wood has been used since 2600 BC in Ancient Egypt, but the advent of mechanised saws in the 1830s saw it emerge as a key material in the industrial age as it was cheaper than cast metal.  From the covers for Singer Sewing Machines, tea chests, car parts, surf boards and the moulded fuselage of Mosquito aeroplanes in the Second World War, the exhibition highlighted the versatility of plywood. Today, plywood has become popular as a material for digital design due to rise of digital fabricating machines known as CNC Cutters (Computer Numerical Control). 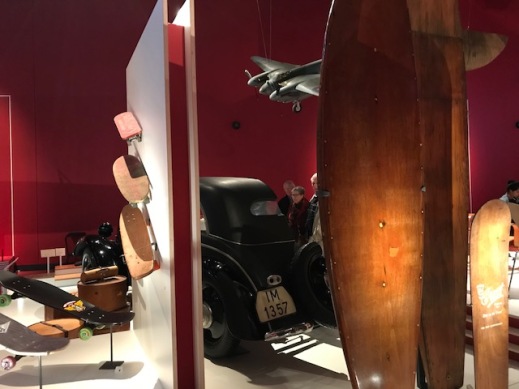 No visit to the V & A would be complete without a wander through the fashion section where we took in (crazy) cumbersome court mantuas, corsets and crinolines –  the starchy, scratchy and restrictive Victorian costumes were a perfect segue to a trip to the Dickens Museum the next day.

Dickens and his wife Catherine lived at 48 Doughty Street in Bloomsbury from 1836-1839, and this is where he wrote OIiver Twist, the Pickwick Papers and Nicholas Nickleby. Some samples of his hand-written drafts – they were published in monthly parts – are on display along with his writing desk and chair and one of his reading desks, from where he performed his public readings. He’d edit his own text and write himself stage directions in the margins. Upstairs in one of the bedrooms is a mirror in which he practised impersonating some of his characters so he could ‘see’ them. 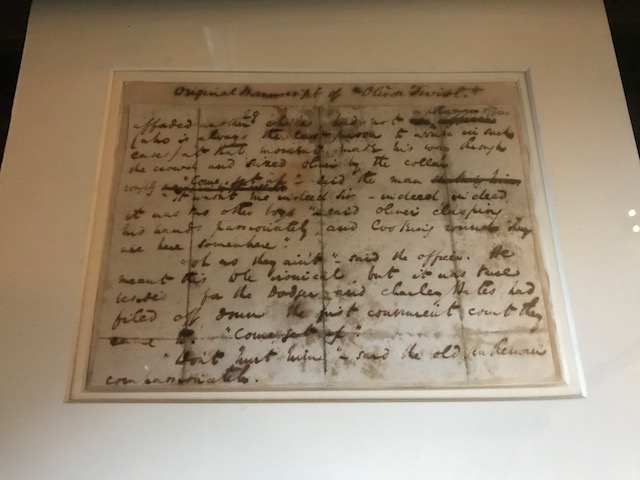 Other more quirky exhibits include a model of a hedgehog in the kitchen (they were kept in Victorian kitchens to eat insects and keep the bug population down), a commode with a letter from Dickens to his doctor complaining about: “distention and flatulency, and disagreeable pains in the pit of the stomach and chest, without any disarrangement of the bowels.” Sounds like a long-winded way (forgive the pun) way of describing indigestion. Dickens was also a big fan of cane chairs, perhaps the latest in ergonomic design back then. He writes to a friend: “I can testify there is nothing like it. Even in this episodical hotel-life, I invariably have my cane chair brought from a bedroom, and give the gorgeous stuffed abominations to the winds.” I’m sure Dickens would have been a fan of mattress toppers had they existed in his day. See: To sleep, perchance to dream