The truth is, people, that staying with family and friends for weeks at a time – while full of blessings, love, connection, reminiscing, giggles and wonderfulness- ­­­­doesn’t afford the same restorative and mind-clearing opportunities that, say, a walking holiday in the Tuscan hills or a week by the beach might. And only ex-pats who trot back and forth to their country of origin get it; others think we are moaning Minnies! But visiting lots of people you don’t see on a regular basis involves a deep dive into lots of lives with all their ups, downs, highs, lows and challenges. Sometimes I find myself lying awake at night reflecting on all these various lives; it can be a bit enmeshing and involving and I sometimes find it hard to detach myself.

Enough of my preamble. Suffice it to say, I enjoyed having a base I could call my own for a few days in a tiny (and I mean tiny) one-room apartment in Vincennes in Paris, an eastern suburb just outside the Paris peripherique. From the outside it didn’t look that promising and my heart sank as I climbed the wooden staircase, plaster peeling off the walls, to the dark broom cupboard where I retrieved the key from the key safe. But, once inside, it was exactly as advertised; stylish, well equipped, comfortable and cosy with very clever use of the space and storage. The only thing it lacked was a fan, which given the intense heatwave, would have made sleep easier! On the upside, the severe canicule (heatwave) meant that the Forfait Anti-Pollution ticket on public transport made travel very cheap. And it was good to see a Government-backed scheme encouraging people to leave their cars at home. 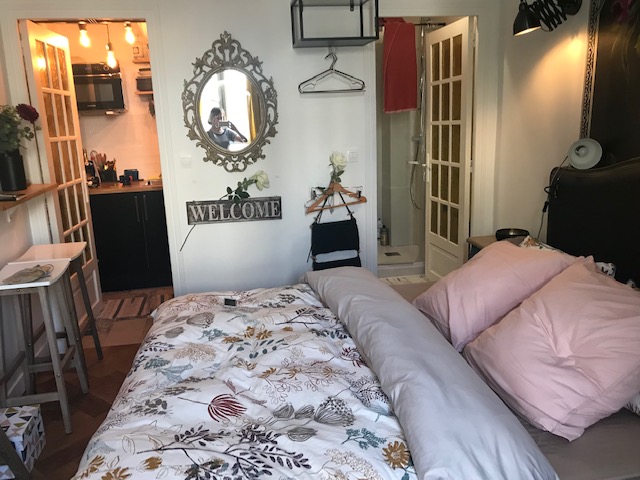 Wandering out my first evening I took in my surroundings: a crêperie, a dressmaker’s/alteration place, a spirituality centre advertising a talk on life after death, a café, a plumber’s, a nail salon, a couple of independent grocer’s, some small dogs on leashes being dragged out for walks in the blistering heat, and even the railway sidings planted up with shrubs and flowers, the tall hollyhocks reminding me of an English border. What I love about Paris is that everywhere you look there’s something interesting; whether it’s a bright red geranium on a wrought-iron balcony, the ornate buildings – decorated with here a Roman head, there a lion or a swag of flowers, the characteristic round attic windows and the flatiron buildings.

The first night I enjoyed a delectable dinner in a local brasserie, the hot mousseline de poisson (fish terrine) something I have never eaten in England or Australia but, then again, I am not a frequenter of French restaurants.

Unable to eat all three courses, I chose fruit salad for pudding and took it back to my garret for breakfast. That morning I indulged in a bit of very gentle tourism, before meeting a friend for lunch,  and visited the Musée Nissim Camondo, a small but exquisite house museum overlooking the Parc Monceau. The house, modelled on the Petit Trianon at Versailles, was built in 1911 by Count de Camondo, a member of a wealthy Jewish banking family, to house his collection of eighteenth-century art and furniture and objects from the reign of Louis X1V. 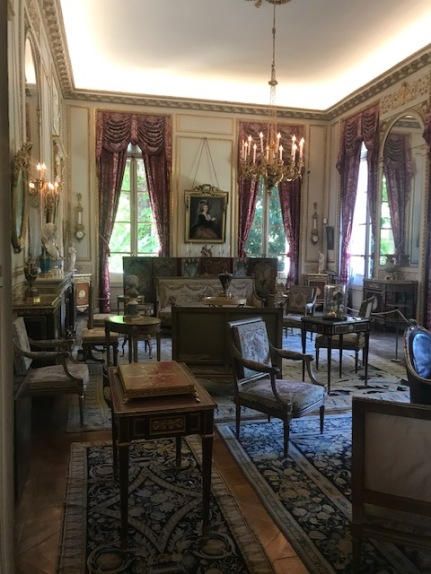 Some of my favourite pieces were the Gobelin and Aubusson carpets and tapestries, a marquetry desk made of over ten different woods, a roll-top desk inlaid with porcelain plaques (one of only ten in the world), the dining room laid up with a silver service presented by Catherine the Great to her lover, and the display of Sèvres porcelain, the Buffon collection, decorated with exotic birds dating from the late 1700s. The Camondo story, though, is a tragic one, the collection, which Moïse bequeathed as a museum on his death, is all that survives of the family. His son Nissim died in action in the first World War and his daughter Beatrice and her two children died in Auschwitz.

On Saturday night I headed to a birthday barbeque my niece, Georgie, and her husband, Manu,  were hosting in their garden in the green and leafy, once communist suburb, of Fontenay-sous-Bois. We oldies – my sister, her husband and I – enjoyed chatting to the youngsters but the pièce de resistance had to the the three-tiered cake – Victoria sandwich with fresh raspberries – that my sister had brought over from London on the Eurostar! The same beloved sister that met me for breakfast at Kings Cross Station at 7 a.m. the Sunday in May I flew in from Perth.  She’s a champ.

On Sunday morning we headed off to the more ethnic 20th arrondissement to the Bellevilloise, an art nouveau cultural centre, once a cooperative – hence the warehouse-y feel – founded in 1877 also housing a café and restaurant. We were there for Georgie’s 30th birthday jazz brunch and we feasted like kings on the all-you-can-eat buffet. Even though weary from the night before and full of food, I insisted that we made a detour to the nearby Père Lachaise Cemetery, resting place of so many notable people and surely a perfect place for the spiritualists’ talk on life after death?

I dragged the family around with me, determined to the last – I’m like that – it’s an annoying perfectionist streak – tofind the tomb of at least one famous person. 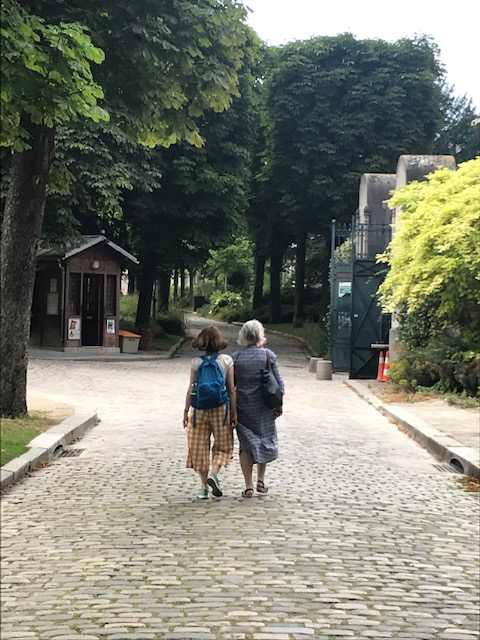 My sister and I in Pere Lachaise

We did eventually find Oscar Wilde’s, although it didn’t really live up to the hype!  And for some years it’s been enclosed behind protective glass to prevent Wilde fans defiling it with lipstick-mouthed kisses. Ah well, at least we ticked it off! The most fascinating thing about Père Lachaise is that when it was first built in 1804, it was considered too far from the city and not well used so the administrators decided to attract more custom by moving the remains of some famous names starting with Molière and La Fontaine. Clearly a successful marketing strategy!

Not Oscar’s but another tomb that caught my eye

As I write this I am on the train – the wonderful TGV – heading towards Provence (tall cypresses that remind me of Van Gogh landscape visible in the distance). Provence means it’s time to pause, time to hang up my tools and let my mind go fallow. No more blogs for a bit – maybe I’ll even do a digital detox!