I’m 50-something and have never been in ambulance – until last week that is.  And while I was no flashing light casualty – thank Goodness – it was a new adventure.  After five blissful days of reading, swimming and walking (oh yes, and eating very well) with my brother and his wife in Provence, I was on day two of a side trip to Avignon. And, for once, I hadn’t planned anything in advance but knew I wanted to make the most of the Festival.  The Avignon Festival is a huge two-week theatre festival originally founded in 1947. Running alongside the official ‘In’ Festival is the ‘Off’ Festival, offering hundreds of shows across theatre, dance, visual arts and music in multiple venues across the city.

I was coming out of a performance of Molière’s L’Ecole des Femmes – in French no less – when I tripped on a step, caught my foot and wrenched my ankle back. Who knew it could be so excruciatingly painful, making me nauseous and dizzy? I tried not to f ‘n’ blind too loudly as I drew quite a crowd and the Red Cross volunteers came zipping over on their bikes.

Tearing those ligaments was more painful than breaking my wrist so I was very happy to discover that I hadn’t broken any bones when I was X-rayed in hospital. And on the plus side I’d basically got a free bone density test. Having spent all night in the Emergency Department of a French hospital with a family member last year, I knew what to expect: a long wait, some interesting characters – this time a woman delivering a three-hour monologue – and staff stretched to the limit. I felt hugely grateful to be otherwise well and able-bodied and not stuck in hospital in a war zone. And my sympathies were with the staff who were wearing T-shirts advertising they were on strike, no doubt for much-needed improved pay and conditions.

I was hungry when I got back in the taxi at 9.30 p.m. that night – lunch had been a bit of fruit and a biscuit on the run after doing a tour of the Palais des Papes.  One drawback to my Airbnb accommodation, just outside the city walls, was that it didn’t have a kitchen and was not well served by cafés and shops. I limped along until I found a shop with inviting pictures of avocados and tomatoes in the window, but when I got inside there were only dried goods, carbonated drinks, laundry powder, toiletries and ice creams. Channelling my inner Girl Scout, I bought a tin of tuna and four ice lollies in lieu of a bag of frozen peas to ice my ankle. It had to be that or the chicken nuggets. The only thing about ice lollies is that they melt quite quickly especially when stuck down one’s sock. Never mind, I put the remaining two in the mini bar fridge for the morning.

I lay awake with a throbbing foot that first night worrying how I would manage the train journey – in 31 hours’ time – from Avignon to Paris and Paris to London, what with my luggage, the long platforms and crossing Paris. I decided to start the day by icing my foot only to find the ice lollies had dissolved to a sticky orange puddle in the very un-cold fridge. Do minibar fridges ever work?!

lollies down my sock 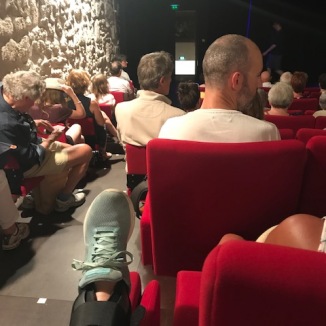 Getting to the pharmacy was a bit laboured – while it seemed miles with a swollen and bruised foot, it wasn’t far enough to warrant a taxi or Uber. I stocked with an ankle support, arnica pills, painkillers and une canne anglaise (how interesting that crutches are called English canes!), the idea being that, when travelling, I could use one crutch to take the weight off my bad foot leaving one hand free to wheel my case. At least that’s what the travel insurance suggested when I had called at 3 a.m. to register my claim.

Then rather than sit in my room and fuss and fret, I asked my Airbnb host to give me a lift to the busy Place des Corps Saints as it would give me a choice of cafes and three theatres. And what a perfect place to hang out! Buzzing with life, people and performers plugging their shows either with flyers or bursts of song, trumpet notes, dances or outrageous costumes, it was one long spectacle. I treated myself to a hearty lunch (the highlight being the lavender-infused goats cheese panna cotta) in one café and then moved to a 1950s style bar for a cup of tea. That afternoon I went to see (foot conveniently propped up) an hour-long Offenbach ‘opera bouffe’– the Ile de Tulipan – a one-act comic operetta with some great duets that explores idea of gender, gender muddles and even the idea of same sex marriage. After a spell in another café, a pack of ice on my foot, I managed to get myself to one more show right around the corner from my accommodation. Il Nouvo Barbiere was full of farce, acrobatics and fun performed by some zany Italians – set, as the name suggests, in a barber shop. Perfect.

I didn’t manage to pre-book assisted travel for my return journey to London but, channelling my friend and erstwhile colleague Heather Ellis (see previous blog: https://wp.me/p3IScw-t0) who travelled solo by motorbike across Africa and the Silk Road, I decided to trust it would all work out, canne anglaise at the ready. And sure enough, the girl next to me on the platform in Avignon had only a small rucksack and offered to help with my case all the way through Paris and to Eurostar as she was also travelling through to the Gare du Nord.  What an angel. I was exhausted and sore on arrival in London but happy to have arrived back in one piece ready for a big family reunion weekend.  Avignon had worked out­ just a bit differently than envisaged: I’d seen some of the sites, had some interesting chats, seen five shows – each one un bon spectacle indeed – and had a free ride to hospital.

2 thoughts on “Adventures of a solo traveller: crossing Paris on one foot”