My ankle now healing I am now more mobile if not entirely comfortable, and more or less beyond the RICE (Rest, Ice, Compress and Elevate) period – at least the ICE bit, not that I could follow that neat little anagram on my travels in France; I’d have needed a lackey to fetch me cold packs or to carry me around in a sedan chair!

So it made me smile when I met up with my oldest and dearest friend Monica last week and saw she was also sporting a bandage around her ankle. She has a bit of a history with ankles – I once pushed her around the Royal Academy in a wheelchair – and this time she’s broken a bone and so her foot is (as one of my nieces would say) well puffy. Puts mine in the shade in fact. Suffice it to say, however, that we were as one moving at the same non-brisk pace, every now and then having a stork-like rest on one foot.

We started our day out at Petersham Nurseries near Richmond in London, an upmarket (shorthand for pricey), artsy, vintage-y nursery surrounded by grassy meadows along the Thames. We had lots to talk about over our artisan tea in the café, the walls framed by cascades of fuchsia-coloured bougainvillea in full bloom. 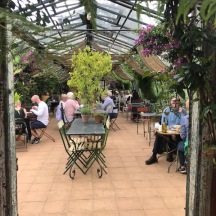 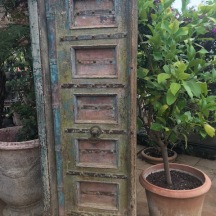 From there it was a short hop to Ham House, a Jacobean mansion gifted to courtier William Murray by Charles I. Educated with the King, Murray was a ‘whipping boy’ and took the lashings for any of the king’s behavioural transgressions – it was meant to serve by example. Talk about a scapegoat. The least the King could do, later in life, was to make Murray one of the Gentlemen of the Bedchamber and reward him with a sumptuous mansion!

Before visiting the house, we had lunch in the Orangery café situated in the walled kitchen garden, a riot of colour and lushness with purple lavender borders contrasting with the orange nasturtiums and yellow sunflowers. Ham House was considered one of the grandest in Stuart England, and is now hailed as ‘the most complete survival of 17th century fashion and power’. Not only that, it’s reputed to be one of the most haunted too. I was disappointed not to see an aristocratic spectre or even an ectoplasmic footman! 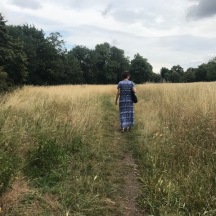 Ascending the intricately carved wooden staircase you come to a series of rooms including the Long Gallery lined with aristocratic portraits including one by Van Dyck of Charles I, a library with a screen made of a double-sided map dated 1743 in which Australia and New Zealand are drawn as one landmass, and my favourite, The Green Cabinet Room, with walls covered in green damask and hung with small paintings and miniatures, one of Elizabeth I dated 1590. Another portrait of note was of Erasmus (school of Holbein) with an intricate frame carved by Grinling Gibbons.

Monica and her husband Jonathan (we met at university) live nearby, and to my delight, Jonathan joined us unexpectedly. By 3.30 pm a volunteer guide started to close the blinds and to shut up the house to protect the paintings – interestingly, the Green Chamber was designed with a curtain rail and protective silk curtains, now restored by the National Trust. Like kids running away from the Bogey Man, we rushed to stay one step ahead.  That was all we needed to revert to our long-standing default of hamming it up – silly faces, voices and giggling – as we sped-read the information cards in each room, here a Japanese lacquer cabinet, there an exquisite monogrammed parquetry floor, here a leather stamped wall, there a bedchamber decorated in honour of Charles I’s wife, Catherine of Braganza. By the time we got below stairs to the servants’ quarters – complete with the Duchess’s bathing room with its round wooden bathtub – we were off the hook. Phew. That’s what I love about old friends; you simply pick up where you left off.

Our final stop was The Still, perfumed with dried lavender and other herbs, the shelves lined with ointments for gout containing pig fat and a bottle of dew harvested in spring this year. In bygone eras, May dew was considered a cure-all and beauty treatment for women, and for men, washing their hands in dew was said to strengthen their skills in knots, locks and net-mending.

I looked up the origin of the word hamming it up as I thought it might be Shakespearean but my research indicates that it means “overacting inferior performer,” dates from America, circa 1882,  and refers to ham fat used to remove stage make-up. Who knew!

But I did get a double Shakespeare fix, once in the British Library, repository of the Shakespeare’s First Folio dated 1623, and then at an open- air production of Midsummer Night’s Dream in Regents Park with my sister and brother-in-law. Booking an al fresco event in England is always a gamble but we hit the heatwave week, perfect for a sumptuous picnic accompanied by a fine English rosé wine, and then watching the play with the setting sun as a backdrop. What a treat to see mischievous Puck, Titania in her fairy bower and the elves on a stage fringed with reeds and surrounded by oak trees. And one of my favourite lines spoken by Helen to Demetrius (who scorns her): “And even for that do I love you the more. I am your spaniel.” Seems spaniels have a long history of being faithful and adoring! 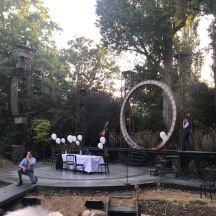 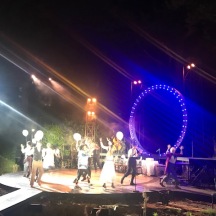 Today my niece and I are off to see a wartime comedy by Terrence Rattigan at Richmond’s Orange Theatre, a theatre in the round. Heatwave permitting, we also plan to do a guided tour of Sandycombe Lodge, one of the houses designed and built by J. M.W. Turner in Twickenham, amid the Thames-side landscape that inspired him.  My long-cherished plan of making the most of my self-awarded time-out in the European summer is going to plan!